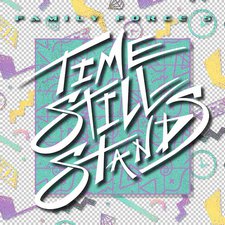 
In August 2014, Family Force 5 came out with their first album in about three years entitled Time Stands Still. It was their first album with former drummer, Jacob "Crouton" Olds, as the lead singer. Now, a little over a year later, FF5 is back with their usual remix album. Time Still Stands also includes their Valentine's Day anthem "Hold Your Hand" and another brand new song "Heartstrings." Compared to their other two remix records, Reanimated and Dance or Die With a Vengeance, this one stands above. On this record there are remixes from Tim Yago, Matoma, and Smile Future. All the remixes here could be played in a club without anyone knowing they are a Christian band. Even though it was released in November, this remix album makes you feel like you are back in summer.

Time Still Stands starts out with the Dirty Rice Remix of "BZRK." The remix is more like a rap song and less like the original electronic rock version. If you saw FF5's set at Warped Tour this year, you would have noticed they sampled this and a couple other of the remixes. The Jessie Cale Remix of "Sweep The Leg" is possibly the most club-ready remix present. The next remix is "Let It Be Love" by Smile Future which is among some of the best mainstream remixes, so it could once again be played in a club. My favorite remix, "This Is My Year," is next. This Matoma remix makes you want to sit on the beach sipping an ice cold lemonade. It has such an infectious summery feel.

Tim Yago's remix of "Time Stands Still" is the weakest song on the album, mainly because it is overly slow. "Glow in the Dark (Graphisoda Remix)" is the last remix on the album and it is too similar to "Let It Be Love," but it is still really good. "Hold My Hand" was a song they released this past Valentine's Day. FF5 has always been known for cute love songs that will rip your heart out, and this is no exception. The album ends with the beautifully written "Heartstrings." It's a worship tune that could easily be a Hillsong Young & Free song.

There is a variety of remix veterans and newcomers on Time Still Stands, but it is surprising that former lead singer Solomon "Soul Glow Activatur" Olds doesn't have a remix here. That is one of the few complaints about this record, but other than that, this album will keep you warm in the upcoming cold winter months!