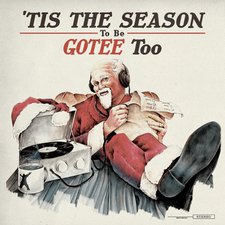 Various Artists
'Tis The Season To Be Gotee Too

It's that time of year again, where stores are adorned with trees and various shades of red and green, and people start making their Christmas vacation arrangements. The holiday season has quickly approached us again and has brought all the wonder and joy that (hopefully) comes with it. Along with the Christmas lights and snowmen, it's also a prime time for artists and record labels to release some new Christmas-themed material. One of the latest installments in the Christmas library is none other than a compilation from Gotee Records--which is home for artists like Jamie Grace, House of Heroes, and Abandon Kansas--the sequel to the label's 2010 release, aptly titled 'Tis The Season To Be Gotee Too.

Opening up the album is a soulful rendition of "O Come, O Come Emmanuel," performed by Jamie Grace. This song showcases her tone and style perfectly and is a nice departure from the original, without disrespecting it. Just on the heels of Jamie Grace's song is "Have Yourself A Merry Little Christmas" by the young and newly signed Capital Kings. For those who are unfamiliar to Capital Kings, they're an electronic-pop duo that favors artists like Owl City. Their spin on the Christmas classic comes out as a moderate pop song, and employs auto tuned voices and different synth and drum beats. Even though it's a fun rendition of the song, it unfortunately makes it very easy to draw comparisons to other groups who have taken a similar route. Stepping up to the plate next is the rock band Abandon Kansas with "Do You Hear What I Hear." They incorporated bluesy guitars, background vocals and an accompanying piano to make it their own. Slowing things down, Stephanie Smith takes on "O Holy Night," in which she showcases her vocal talent while having instruments like acoustic guitars, bells, and banjos to back her up. Although this is a much simpler song compared to the previous ones, it provides a nice change of pace and is overall a beautiful cover and one of the highlights on the album. Capping off "side A" are the Ohio natives, House of Heroes. The rockers chose "The Rebel Jesus" as their song of choice and change it enough to suit their style, without going overboard. They keep their signature guitar and percussion patterns, but they are still able to give off a slightly different feel than what we would typically hear on a HOH record.

Up next is "What Child is This?" coming from Jamie Grace again, featuring special guests Abandon Kansas. This is considerably different from both of their previous songs, as it is much slower and acts in a call-and-response style with their vocals. The sleigh bells within the song also add a festive touch. Another newly signed Gotee band, Finding Favour, puts a slight twang on "Silent Night." The song is quirky and full of energy, but a little odd considering Finding Favour's predominately a pop/worship group. It's good that they're stretching themselves, but unfortunately this one is a bit of a miss. Keeping the ball rolling, Jamie Grace is featured yet again, but this time under the moniker 'Harper Still' along with her sister, Morgan. The Harper sisters recorded "I'll Be Home For Christmas," and even though they maintain the slow tempo of the original, their arrangement has a "beachy" vibe to it. Their voices sound lovely together, naturally, so there's technically nothing wrong with the song itself, it just doesn't feel quite up to par with some of the others. Soulful/folk band Johnnyswim did a fitting rendition of "Baby It's Cold Outside." Giving their genre, it practically lends itself to the song, as they are able to keep to the same formula that the original has, and they pretty much stick with it throughout the whole song. Taking a polar opposite approach is Capital Kings, reappearing and finishing off the album. They took the immensely popular "Carol of the Bells" and threw a dubstep twist on it. This is probably going to be one of those "you love it or you hate it" tracks, depending on personal preferences. Either way, it's an interesting way to close out the record.

What you're going to get on 'Tis The Season to be Gotee Too is a mixed bag, as what you would expect from compilations like this. This record does a fine job of covering almost all the bases when it comes to representing several genres, even though not all the songs nail it on the head. There definitely are some high (Stephanie Smith) and low (Harper Still) moments on here.

The main concern with this record is the double dipping of artists on here. While Gotee does have a relatively small roster, there are different ways they could've incorporate other acts or duets without having Jamie Grace lend her vocals to three, Abandon Kansas featured on two, and Capital Kings produce two out of the short ten-song track listing. They could have had artists from their sister label, Mono Vs. Stereo, contribute a few songs, as it would have added variety while still being within the same label family. I suppose it wouldn't be that big of an issue if it weren't for such a small amount of songs presented, and maybe for some people, it isn't an issue at all.

Regardless of the amount of artists (or lack thereof), 'Tis The Season to be Gotee is a sonically eclectic collection that will add some flavor to your Christmas playlist.