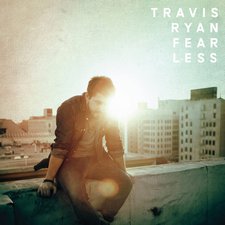 Ever since Rick Warren's New York Times best-seller The Purpose Driven Life hit shelves in 2002, Saddleback Church in Lake Forest, California, has drawn a spotlight from the evangelical community. Even ten years after the book dropped into the hands of readers everywhere, the effects of Warren's star power are present, and Travis Ryan is no exception. As worship leader at Saddleback, Ryan's public "seal-of-approval" from Warren no doubt brings good things to his debut studio effort on Integrity Music, Fearless. The result is worship project that is better than most.

With gritty guitars accompanied by Ryan's reserved, but effective, vocal style, Fearless is immediately off to a great start with the hard-hitting "Love That Has Won" and "Battle Song." The production value here is especially high, and with big names such as Adam Hawkins and Chris Testa (more famous for behind-the-scenes work with secular artists such as 50 Cent, Jimmy Eat World, Goo Goo Dolls, and more) on mixing and engineering duties, the album has an epic feel without going overboard in theatrics. As a studio-recorded worship effort, the innate musical power of the album never feels forced or canned, which is a very hard tightrope for any worship artist to walk. "The Wrestling," "Jesus My Victory," and "Devotion" all shine as the crowning trio of Fearless, combining effective melodies with well-written lyrics for a solid worship experience.

With this recording quality as the basis of the album's quality, Fearless avoids major pitfalls but is an imperfect project that struggles mostly in little areas. "Lord Most High" is a somewhat forgettable inclusion, while the album's lead single "Jesus Precious Jesus" boasts good quality in sound, but not so much in lyrical complexity, especially in the simple-to-a-fault chorus ("Jesus, precious Jesus/O Jesus/You are the King"). But this nitpicking is a little unnecessary in the long run; some tracks are written better than others, but as a general rule, one would be hard-pressed to find a "lazy" or even a "bad" track in the bunch. However, the album as a cohesive project is less than astounding as an experience. As accomplished as the first few tracks are, the rest of the album follows suit, but the result is a record without much variety. Listening to the album in a straight shot makes Fearless run together significantly. In some ways, listening to the album's songs in a shuffle with other music would strengthen its replayability factor, but playing the eleven tracks in a single run-through decreases each song's individual power.

Worship albums have got to be one of the hardest projects to get right for any artist, and Travis Ryan certainly comes closer than the majority of his contemporaries. Indeed, Fearless does more right than wrong, and some aforementioned tracks are really something to behold. One wouldn't make a bad choice in picking up Fearless, but Ryan would do very well to continue seeking out pristine production for his next studio effort which will surely be an improvement; this listener is confident that Ryan's best is yet to come.