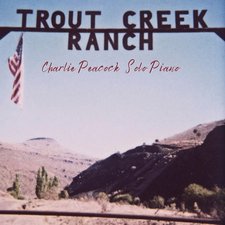 
When quarantine went in full swing during the pandemic, many speculated that artists cooped up in their homes would be extra productive the following year. Famous producer and musician Charlie Peacock seems to be unleashing some pent up creative energy at the start of 2021. Already he's released two albums in January (Skin and Wind and Paisley Crusader), then in March he put out Trout Creek Ranch. Although initially recorded in 2017, this solo jazz piano record is finally seeing the light of day.

There's no mistaking that this is a jazz album. It swaggers in and lounges in your speakers in an easy-going, care-free way. One track is titled "Barely Stated Melody" and that is, in essence, the mission statement of this music. Occasionally, a light hook pops up but rarely does it develop into a motif your ear can follow. As such, the tracks tend to blur together without much to distinguish one from the other. But this may be Peacock's point.

The "story" of Trout Creek Ranch seems to be reminiscing about the past. Certain titles (like the title track, "The Boarding House," or "Mr. Estabrook's Rowboat") combined with the throwback style of the cover art give the impression that Peacock is reflecting on the past. As such, the blurring nature of the songs makes sense in the same way memories tend to flow together. This gives the album a certain quality where it never lets you focus on what's being played but instead encourages your mind to wander.

So is it a genius album or passable? The answer is somewhere in the middle. There's no denying Peacock's versatility and skill on the piano and there are plenty of spots where Trout Creek Ranch is technically impressive. But at the end of it all, it works best as a background soundtrack to soothe the mind or help you focus or just let your thoughts wander. Fans of jazz or soothing solo piano should give Charlie Peacock's latest a try.