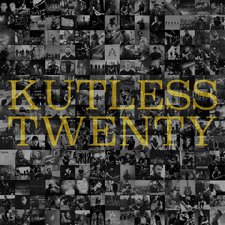 
In 2002, Christian rock was still being seen as taboo in many circles. Sure, there was already an established fanbase of Christian rockers from the 80's and 90's being led by table-setters like Stryper and Petra, but in the mainstream of Christian radio in particular, there was a certain line you were not allowed to cross. Enter Kutless, whose debut album gave them reputability with angsty Christian teens, while being accessible enough to make waves in the mainstream as well. Though the album had its ups and downs, it was a solid beginning that would introduce us to what would be one of the most popular Christian rock bands of the 2000's. Kutless started out as more of a grunge-rock band, drawing similarities to Creed and Nickleback, before transitioning to a more radio-friendly worship band, a trend that has unfortunately spelled the death of many a promising rock act.

To celebrate the twentieth anniversary of their debut album, the band re-recorded three of the most well-known tracks off that album. From the opening sounds of "Your Touch," we're introduced to a much more polished and mature sound, not only in the production quality that comes with a bigger budget and modern equipment, but also in the instrumentation and vocal department. There's a healthy busyness going on in the background that fills out the sound much more than the original, while the structure of the original remains intact. Come to think of it, I've now heard a growing number of these "reimagined" songs, and I'm still not entirely sure what that term means. As best I can tell, these songs are just re-recorded, adding little additions and changes throughout. This is not to be confused with the old "remix" which evokes memories of techno-bloops squeezing all the life out of your rock favorites.

"Your Touch" introduces layered background vocals, a touch of autotune, and sampled electronic drums in the bridge, which unfortunately is ripe for the criticism of "trying too hard." The most well-known song from the debut, "Run," gets the least amount of makeover here. In fact, the original's unique violin and cello parts do not make a repeat appearance, making this version quite underwhelming. "Tonight" thankfully bucks this trend, having the most changes of the bunch, opening to a synth lead and dissonant guitars that are utilized throughout, serving as the song's new foundation that adds punch and energy to an already solid track. Kutless has always been firm in their faith, and these songs in particular feature some of the best lyrics in their discography, showing both a humble need for God, and a call to stand resolute in our faith no matter the cost, "Some say that It's, it's not right/For us to praise on this type of night/tonight there's more/can't you feel the music all around you/flashing lights but love can fill your mind/can't you feel the sounds of love flow through you/we're praising Him tonight."

As a fan of early Kutless, and subsequently falling away once they went to Christian radio, hearing these few "reimagined" songs made me believe that this veteran band still has it, and I'd be interested in a new full-fledged rock album from them. John Micah Sumrall's vocals are instantly recognizable, having nearly reached the iconic stage in Christian rock, and the band has clearly matured, learning tips and tricks throughout these two decades. Here's hoping they can put it all together.