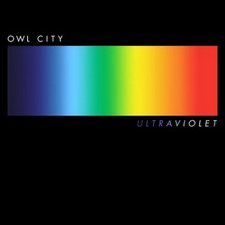 2009 was when the world at large was introduced to the synthpop phenomenon known as Owl City. Adam Young's first two albums with Universal Republic lived up to the "phenomenon" status, but in 2012, his third full-length, The Midsummer Station, left me with nothing but disappointment. The album was mostly produced from the outside (unlike all of his previous material), and you could really tell that it was severely lacking the Adam Young magic. However, that all changed when Young released the first single from his forthcoming project, and it was like all hope had been restored. And that project, the Ultraviolet EP, takes us back to the Owl City we all know and love.

The EP opens with the super delightful "Beautiful Times," and you can't help but let yourself fall into a deep tank of bliss. This is the Owl City I missed when The Midsummer Station came out. With a vocal melody and song structure fairly reminiscent of the Ocean Eyes track "Hello Seattle," it's sure to capture your heart. Lindsey Stirling joins this track to provide some wonderful violin, even getting an opportunity or two to shine on her own while making the Owl City fan feel even more at home. If you're not familiar with her, she's a pretty, young lady who is mega talented and who does incredible stuff with the violin. She has tons of themed videos on YouTube, including some music based on games from The Legend of Zelda, so look her up. "Up All Night" is the second song, which is a little further on the progressive side. It would fit pretty well on All Things Bright and Beautiful, with a little hint of Mae thrown in, though there doesn't seem to be any organic instrumentation here. The song is about a lost love; Young starts off with the lyrics "I fell in love with a ghost," and continues on with the idea of this love not existing anymore ("And I swear I could feel you in my arms, but there was no one there at all").

"This Isn't The End" covers ground that's a bit surprising for an Owl City release. It uses what may be the least amount of symbolism of any Adam Young-penned song as he tells the story of a young girl whose father commits suicide. I know that sounds really dark, but there's some light at the end of this tunnel. The song focuses on the girl, eight years old at the time, and the struggle she faces. Of course, Young's intent is not to sum up this kind of experience in three minutes, but the song does course through the girl's heartbreak over her lost father, briefly mentions the father's abandonment, and then settles on the girl, a little older now, finally being able to forgive him. The music is fairly lighthearted, but I know this song will resonate in many people's souls.

To close this short EP is a highlight of the year's pop offerings, "Wolf Bite." Acting as somewhat of a call for God's help, "Wolf Bite" is a half mid-tempo, half dancey track that again hearkens back a few years to All Things Bright and Beautiful. The song uses somewhat dark imagery and words like "bad dream," "darkness," and "despair." The hook says, "If the world goes blind and I lose my mind will You show me the way tonight?" In an increasingly dark world such as ours, full of wolves in sheep's clothing, Young does here what is imperative for us all: asking God for help.

The Ultraviolet EP is a breath of fresh air. Not only does it rank very high as far as 2014 pop albums go (including EPs as well as full-length releases), it's also a worthy addition to Owl City's catalog. This is what I was hoping for after All Things Bright and Beautiful, and I believe I'm satisfied. And if my understanding is correct, this is just the first in a series of EPs. If Ultraviolet is just the beginning, I can't wait to see what's in store from Adam Young.