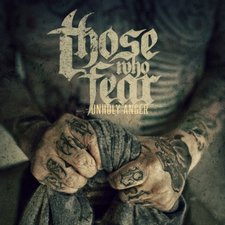 Those Who Fear
Unholy Anger

Facedown Records and their sister label, Strike First, have become a breeding ground for solid metal acts over the last couple of years. Newcomer, Those Who Fear, break the typical Strike First-to-Facedown pattern the label has demonstrated in the past as they have only a self-released EP prior to their Facedown debut, Unholy Anger. The label must have great faith in this Pittsburgh band's blend of hardcore/metal to place them directly center-stage for their first record.

The album starts positively with the lead track, "Daggermouth." Not only does the song have a cool name, but it also had a good sound. The lyrics focus on an untruthful person and the title makes full sense when the lyrics, "You are a liar; just a dirty snake. Backstabber! Backstabber," drop. However, things get a little sour with the Disturbed-like "eghah" at the 1:51 mark (it's also repeated in other songs). Shortly after the start of the record, monotony sets in. Granted, there are only so many places this type of music can go, but the constant growling and chugging guitars all start to blend together. If you're not watching the songs change from one to the next, it's very easy to lose track. The only songs that slightly change things up are the slower "Day of Judgment" and the instrumental final track, "Colossus." Don't get me wrong, though; musically, the album sounds alright, but if you're not paying attention completely, it begins to sound a bit like background fodder.

Lyrically, you get just what you expect from a Facedown artist - spiritual and biblically based messages. Those Who Fear focus a little more on darker subject matter with this release, as may be evident by the album title and tracks like "(Un)Holy Anger," "Day of Judgement," or "Sowers of Discord." Vocally, the lyrics are delivered in the same growl with little to no variation throughout the entire album.

Overall, Unholy Anger isn't bad, but I wouldn't necessarily classify it as "good" either. Sadly, a good opening sound leads to a monotonous experience that becomes more difficult to get through entirely with each listen. The record works better when listened to as individual songs separate from one another - and even then you may think you've heard it before. Those Who Fear sound as if they may have the ability to break out of the mold they cast themselves in with their debut, but only time will tell. If you're just looking for some new music to fill your metal or hardcore void, Unholy Anger may be for you, but if you want to branch out some, you will probably want to pass this one up.