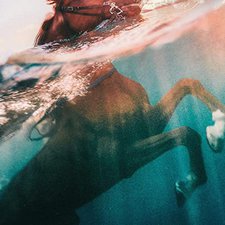 
I recently became a fan of nobigdyl, so I wondered when he would be dropping his next project. Was he taking a break from music? Did he have another project in the works? Turns out, the latter is true. He decided to join a rap group called indie tribe. The roster comprises of himself and three lesser-known but talented artists (Jon Keith, Moglli the Iceburg and DJ Mykael V). Their first album together is entitled U P P E R H A N D.

When I think of rap groups, I think of Gospel Gangstazm, Cross Movement, Grits, 116 Clique, and Deepspace 5. How does indie tribe's debut stack up? I can say confidently that it is a solid debut for the collective. It doesn't reinvent the wheel, but the beats are slick and the rhymes are golden. Each artist brings their own style to each track, and it elevates the album because of it.

Like I said before, this album isn't the best rap album of the year, but it is still very enjoyable. Take some time to give U P P E R H A N D a listen. We will see what the future holds for indie tribe. If this is their debut album, their future looks really bright.