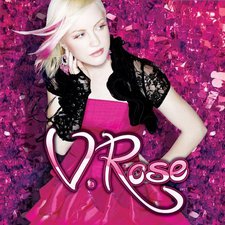 I recently returned from the iMatter Fest up in Elmira, NY. When I got there, I was expecting a night featuring some good ol' rap with Trip Lee and Flame to rock the stage. I got more than I anticipated, however, and was introduced to V. Rose, the vocalist from Flame's 2010 hit, "Surrender." She and Flame shared the stage and mic that night and I was interested in finding out more about this girl who so brilliantly handled the dance party. I came to learn that V. Rose hails from Sacramento, CA, has opened for artists like Group 1 Crew and Braille, and has been in the music business for many years. Signed to Clear Sight Music, this self-titled album is her first full-length album.

The album opens with "Not So Average," where V. Rose showcases those high pitched vocals that caught her quick recognition from "Surrender." The song carries a nice combination of imaginative beats laced with pop, R&B, and rock, a sound that will be used much on the entire listen. The next track, "Christian Girl," is simply an amazing song for today's young women. It's a song that can be bumped at any party and carries a message perfectly fitting for today's teenage girls. Following is "Battery," which features Flame and rekindles that amazing sound the two sparked together last year. The song carries an anthem type feel with great production and seriously good rapping from Flame. It's so far, so good for the debut album. "Hater" and "Run That Way" follow, and while the messages are good, the songs feel disjointed and incomplete; overall, the pair makes a mediocre song set.

"Dear Adam," "Love Pursuit," and "Cry Holy" slow the beats down and nicely bring a softer side to the album while touching on more deep subjects of life. "Girl What U Looking At" and "Let's Go Home" give positive values when it comes to teenage relationships and could be labeled as standard radio play tunes. By the end of the record, you will have traveled through some life stories, gained some food for thought, and definitely felt the dance vibes spawned from great production.

Most of the album is rather good with a small handful of tracks that need some more work. The focus throughout the whole album is on God and V. Rose should soon find herself among the elite in that great radio-play-type of girl-power-pop sound. All in all, this is a stellar freshman release and should be picked up by party music lovers everywhere.