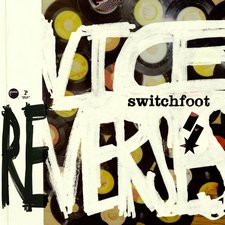 Once Switchfoot released their career-highlight record, Vice Verses, last fall, it was hard for fans to really anticipate what's next for the quintet. On the heels of such greatness, it was going to take quite awhile for anything truly monumental to follow the album, and fans will have plenty of time to revel in Vice Verses' greatness. Just for kicks, however, Switchfoot recently outsourced remixing responsibilities for a unique remix project. The result is Vice Re-Verses, an intriguing project, to say the least.

The EP opens with Paper Route's JT Daly and his frenetic remix of "The Original." Replacing the song's trademark guitar riff with a crowd's "la las" and "na nas," the track's bouncy nature remains intact as an explosive beginning in trademark Paper Route fashion. Renowned electronic mixer Photek shares his talents on "Selling the News," and it really makes for a great variation (and it's perhaps the EP's best inclusion). The song's message is never downplayed, and the synths dip a little into dubstep waters for good measure. Adam Young's take on "Blinding Light" comes next, and as one would imagine, the Owl City influence is everywhere. It works most of the time, though the chorus falls flat with a lack of any dynamics, and it feels less like a true "remix" than it does an Owl City cover with Jon Foreman's vocals thrown in.

JT Daly makes his second of two contributions to the EP with his remix of "Dark Horses," which feels a little muted compared to the original's ferocity. It's got an underwater sound to it that almost seems hollow in its overall arrangement, though it contrasts with the original's authoritative powers effectively as a result. Mute Math's Darren King takes the helm on "Vice Verses," and not much on the track surprises, given the contributor. Experimental percussion takes center stage, and the flittering keyboards all give the track a dreamy, atmospheric ambiance. Finally, DandJ's recreation of "The War Inside" comes as a bit puzzling, as the track never seems to get off the ground from the quieter start. As the original track builds, the ultimate power of the song resonates at the track's end, hitting home with a solid climax. Here, the soft pianos and fast-paced electronic drumming are interesting when heard together, but they pale in comparison to the show-stopping original. (Note: The fan-remixed rendition of "Afterlife" was not available to press ahead of time for review. It also does not appear on the CD version of the EP.)

Remix projects are meant to breathe new life into songs, but they're never supposed to replace the original product, and Switchfoot follows these guidelines with Vice Re-Verses. Some songs are off-the-wall fun, others are thoughtful reimaginings, and some just never quite take off. But as an experimental project, the rules of the game change, and it's enjoyable to hear alternate versions of these tracks for the novelties they are, even if the final product isn't the most balanced. Casual fans of Switchfoot need not apply, but the band's die-hards are sure in for an interesting ride with the ups and downs of Vice Re-Verses.