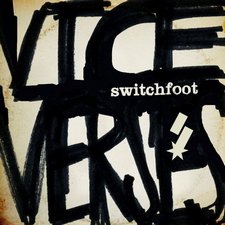 
With a band like Switchfoot, it's hard to fairly sum up their career in a concise manner. Beginning as a humble mid-90's rock trio, they've grown to be a powerhouse quintet that's only gotten better with time. With the monumental Hello Hurricane still fresh in their fans' minds, the follow-up has been awaited for what seems like quite some time, and now it's here with guns blazing. With anticipations abound, Vice Verses fulfills every one of them - and perhaps more.

Within the first few seconds of the opener "Afterlife," this listener had the longest grin on his face upon his first listen. Indeed, with the dirty guitars front and center and thunderous percussion to balance, it's a convincing cry to shatter complacency ("and I wonder, 'Why would I wait 'til I die to come alive?'/ I'm ready now, I'm not waiting for the afterlife.") As a perfect follow-up, "The Original" hastens the pace with energetic drumming and ingenious riffs, and by this point, the listener knows "the Switchfoot sound" hasn't gone anywhere. The crunching guitars and the subtle-but-creative keyboards are back as well, and Jon Foreman's vocals have never sounded better; they shout with a sense of urgency and always deliver when they matter the most.

As a general rule, Switchfoot's upbeat sensibilities take the forefront like usual. "The War Inside" most appropriately carries a "battlefield-style" tone; the blunt and cutting lyrics flow to the riveting guitars, penetrating the cause of strife in the process ("I'm the war inside, I'm the battle line, I'm the rising tide.../eyes open open wide, I can feel it like a crack in my spine, I can feel it like the back of mind."). As it's already demonstrated, the lead single "Dark Horses" screams of glory as its landmark riff leads into completely developed rock anthem, while "Rise Above It" similarly stands firm in affirmation and confidence.

Some of the slower moments in Vice Verses, however, are the most powerful. "Restless" could fly as a flat-out worship song; atmospheric guitars crescendo and rise up to seek out the Creator and His love ("I am the thorn stuck in your side, I am the one that you left behind, I am the dried out doubting eyes, looking for the well that won't run dry.../I am restless looking for you/I run like the ocean to find your shore, looking for you"). Bound to be a fan favorite, "Thrive" never becomes particularly loud in execution, but almost understates a bitter yearning for significant life purpose ("No, I'm not alright, I know that I'm not right/feels I travel but I never arrive, I want to thrive, not just survive"). "Souvenirs" reflects and tributes to youth and liveliness, and the title track asks convicting questions and drips with transparency in Foreman's honest vocals behind a pure acoustic surface ("You got your babies, I got my hearses/every blessing comes with a set of curses/I got my vices, I got my vice verses").

Easily the most different track for Switchfoot this time around is "Selling the News," using a vocal technique of seemingly both speaking and singing. With pointed and frank methods, Foreman directs criticism at media corruption ("money speaks volumes louder than words.../the salary's are paid with the ads, not the verbs") and consumption ("the loudest common denominator prevails.../the facts are simply one option to choose"). It's a brutally honest track with an equally unusual musical backing that may take some listeners longer to buy into than others (pun definitely intended). The emotional peak of Vice Verses, however, is found in the epic closer "Where I Belong," longing for heaven and its promises after death. Linking directly with "Afterlife," the lines they share bring Vice Verses together in a tidy collection ("I still believe we can live forever, you and I, we begin forever now"). While their time on earth is not yet done, Switchfoot beckons their listeners to make their lives beautiful on earth, for their home in heaven is still being prepared.

Vice Verses is a clean album of sincerity and grace; it takes everything about the band that their fans have come to know and love and have somehow kicked everything up by a notch. The catchy rock songs aren't in short supply and the moments at which Switchfoot chooses to slow down are nothing but inspired. Not one song feels out of place or quirky beyond recognition. Though it's unmistakably a Switchfoot record in every sense, it feels especially imperative and bearing on the listener not just in how it provokes important thoughts, but also how a given song can relate to anyone's story. It's a tightly constructed project that gives more than it takes and allows for deeper contemplations than most rock albums.

While listening to what has easily been the most anticipated album of the year, it's hard not to compare Vice Verses to Switchfoot's prior projects and stack them up by excellence. Is this album the band's best work to date? It may still be too early to make that call, but without throwing out the question immediately, it's quite a threat to this title. At the very least, however, Vice Verses is many other things - wild but serene, articulate and focused, and flowing with pressing intentions. Any way it's sliced, Vice Verses is a significant achievement for Switchfoot and is, beyond a doubt, 2011's crowning tour de force.

Since 1997, Switchfoot has been satisfying the ears and hearts of music fans worldwide. Two years ago, the band released what is arguably one of their best projects to date with Hello Hurricane, even grabbing a Grammy win for it earlier this year. Around the same time they wrote the songs for Hurricane, the band penned what would go on to be a fan favorite with the song "Vice Verses," already knowing it would be the title track of their to-be-determined follow-up to Hello Hurricane. Now the storms have passed and Vice Verses is here to touch down upon eager listeners. The album carries a similar edgy and raw sonic feel to Hurricane, but amps it up a little bit more at times, mixing in some of the melodic catchiness that albums like Nothing Is Sound and Beautiful Letdown boasted. Thematically, Vice Verses continues Switchfoot's frequent themes of wanting to live for more (the mellow "Thrive" and rocker "Rise Above It") and even pondering life after death (the opening rocker "Afterlife" and the fantastic emotional closer "Where I Belong"). Musically, the only song where the band actually takes a little risk may be with the rant-style talking vocals used throughout the quirky but fun "Selling The News." Other gems include the edgy and anthemic "Dark Horses," "The Original," and the lovely, thought-provoking balladry of the title track. Vice Verses has been a longtime coming, and I honestly can't remember the last time I found an album as satisfying, exciting and consistently enjoyable from listen to listen as this Switchfoot's Vice Verses. - PReview date: 7/14/11, Review date: 9/25/11, written by John DiBiase of Jesusfreakhideout.com