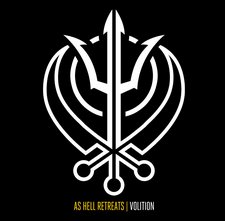 Last May, Strike First Records brought us the debut album from hardcore act As Hell Retreats. The album was Revival and it was a fairly good introduction for the band, giving us a good taste of who they were in their style and delivery. Most bands that release an album through Strike First end up moving up into the Facedown Records ranks, but these guys went a different route. Along with Sleeping Giant and The Great Commission, As Hell Retreats signed with the new missions/humanitarian-focused hardcore label, Ain't No Grave Recordings. And courtesy of Ain't No Grave comes their sophomore album, Volition.

Revival wasn't among my favorite albums of 2010, but overall it wasn't a bad album. Riding the line between hardcore and death metal seemed to be their game, and it's carried on into Volition. The opening track starts off a little unexpectedly with some strange guitars. You think you know which direction they're going with the guitar lines, but you will most likely be wrong. It's somewhat of an odd start to the album, but As Hell Retreats changing things up from the norm in hardcore music is much appreciated. To throw things off a little more, the second track is a short, very toned down instrumental guitar-piece that comes in and goes out a little awkwardly. It's good, but I don't understand its placement on the tracklist, given that it's a minute long and is between two heavy tracks. "Beggar" is another slower, less intense track. It has guitars that walk a fine line between hardcore and indie rock, though the vocals are still more harsh than what you'd expect from the music. In "Desperation," about halfway through the song, the tone becomes ambient for about thirty seconds, with some punk rock style speak-singing. Overall, the hardcore stuff is fairly on the unique side, with some Living Sacrifice influence, as well as some Meshuggah thrown in.

Lyrically, I was surprised to find out that Volition is a concept album, with a storyline that extends through the whole album. Without giving away too much to those who are interested in pouring into this album themselves, it involves a boy's faith that gets shaken up and shattered when he loses his mother - the one thing that was holding his life together. Being pushed away by a pastor after the pastor feeds the boy Christian cliches in "Shun," he turns away from God (who he refers to as a murderer for taking his mother's life). He ends up finding someone who still has faith in God; someone who it seems would have no reason to. Throughout the story, As Hell Retreats uses the music to the story's advantage for the most part, like in "Creator(s)," when the boy dreams of his mother. The music becomes something akin to a so long forgotten instrumental track, with a woman's quiet voice speaking to her son. There are times when the boy is full of doubt or anger, and the intensity of the music appropriately picks up.

Volition isn't a huge step up from Revival, soundwise, but I do think As Hell Retreats has surpassed it in general quality. I like the direction they're headed. It's not really your typical hardcore music, which can get so tiring when every new hardcore band carries the same sound. I can honestly say that I'm excited about where this band will go from here with their newfound record label, and their sound that, so far, has improved from one album to the next.