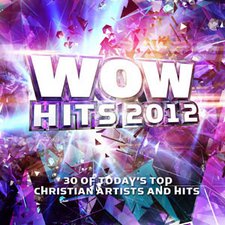 It's been a while since the annual WOW Hits series contained the usual 15 songs per disc plus bonus tracks (totalling around 16 or 17 songs per disc). In fact, the last time was in 2007 for WOW Hits 2008. The collections for WOW Hits 2009, WOW Hits 2010, and WOW Hits 2011, for reasons unexplained, 15 tracks per album now included the bonus tracks. Also during those years, WOW Hits became notoriously famous for including repeat songs from previous years. Examples included "Set the World on Fire" by Britt Nicole (WOW Hits 2008 and 2009), "The Words I Would Say" from Sidewalk Prophets (WOW Hits 2010 and 2011), and Tenth Avenue North's "Love is Here" (WOW Hits 1 and 2009). In fact, it was during these times where I boycotted WOW Hits, as, apart from last year's edition, half the songs on WOW these days are overplayed while underrated artists never are acknowledged. However, this year's WOW, while far from perfect, is a step in the right direction.

Disc One of WOW Hits 2012, at a glance, is the standard adult contemporary formula used on previous years' disc one of WOW's, with little or no surprises on it. However, a much closer look reveals a more thought-out and refined list this time around.

What is good about this disc is that there are songs for the worship leader, and songs for the radio listener. Radio favorites "This is the Stuff" (Francesca Battistelli), "Your Love" (Brandon Heath), "I Refuse" (Josh Wilson) and "Stronger" (Mandisa) all make the cut, which should please the avid fan of Christian pop radio, as well as the casual listener, as these songs have all garnered praise and acclaim since their airplay. Worship favorites "I Will Follow" (Chris Tomlin), "Christ is Risen" (Matt Maher) and "Your Great Name" (Natalie Grant) are included as well, and it's no secret that worship leaders would use these anthems in churches in the coming months. The two bonus tracks, "Jesus I Am Resting" (Tricia Brock) and "What Was I Fighting For" (Patrick Ryan Clark), are also welcome additions onto the WOW roster; these songs give an indication that these two artists should have acclaimed music careers ahead of them. And MercyMe have made a long awaited comeback with "Beautiful," a worthy addition, particularly since their music video was quite popular this year also. Matthew West's "Strong Enough" and Sidewalk Prophet's "You Love Me Anyway" inclusion also give a rousing and heartfelt message to listeners everywhere that God is strong enough to help us through our problems and that He loves us in spite of what we have done. However, I want to draw special praise to my favorite on the disc, "Lead Me" from Sanctus Real, a song that, in my opinion, should have won 'Song of the Year' at the GMA Dove Awards, seeing that the song made such an impact that it topped the Christian Billboard charts. Sung from the point of view of a father praying to God about him leading his family in their Christian walk, this song has such an inspiring message and relevant lyrical content, and every time I listen to it, the song never ceases to amaze me.

Disc Two typically contained the more rockier and edgier tunes, more built for rock radio than disc one, and a quick glance through the list reveals quite a few gems. The Afters appear back on the list after five years in the wilderness, and what a song to come back to WOW with "Light Up The Sky!" Building 429 is another artist who also comes back into the fold after five years, and their offering "Listen to the Sound" is worthy, vibrant, and makes you want to praise God, especially in the hymn-like bridge. It's a pity David Crowder*Band are calling it quits, but "SMS (Shine)" is a great way for them to bow out, and their video for their song (made with a Lite Brite) is truly innovative, creative and well made. Tenth Avenue North's "You Are More" is like "Lead Me" on the first disc; this song speaks volumes to me. Peter Furler's debut single "Reach" after parting ways with the Newsboys is another treat, for Newsboys fans and others alike. Third Day's "Children of God" and Kutless's "Everything I Need" are also commendable selections, each with an important message and great music to rock out to. And there are even songs for the worship leader and songwriter, with Leeland's "I Wonder," and NEEDTOBREATHE's "Something Beautiful" both exemplary and praiseworthy additions that have honest and yearning lyrics and a tone that just tells the listener to worship Jesus. Newcomers Dara Maclean and Royal Tailor are dark horses in their additions, yet somewhat refreshing and energizing; it's been a while since a new artist has come along with a song that one can say that 'They're going to make it BIG!', but that is the case for these two. Dara's soulful voice brings an uncanny resemblance to Francesca Battistelli, and Royal Tailor's infection for praise and worship as shown through their video for "Make a Move" brings a smile to the face, and I'd be tipping those two for New Artist of the Year at next year's Doves.

Last year, in WOW Hits 2011 Deluxe Edition, six songs were made into remixes and the result was mixed. This year, instead, there were six radio hits in WOW HITS 2012 Deluxe. Anthem Lights' "Can't Shut Up," Kerrie Roberts' "Outcast," Hillsong United's "Search My Heart," Chris Sligh's "Only You Can Save," Jason Castro's "You Are" and Nichole Nordeman's "I'm With You" from The Story CD releasing the same day, are the inclusions. At first glance, these are all worthy, yet looking deeper, maybe Chris Sligh and Jason Castro's songs are a bit dated. I would have replaced them with no hesitation with Matt Hammitt's "All of Me" and Brittany Hargest's (from Jump5 fame) debut single, "Love All The Way." Nevertheless, the idea of more radio hits than remixes is a good idea, as many people may not have heard the originals of the remixes before, and I say exposure to Christian music should be done with original songs, not with songs given a musical makeover.

All in all, this year's WOW is a step up from last year's WOW, which was a step up from the year before. It seems like something is being done right. However, there are a few queries from me as well as repeats, as well as notable artists missing. Casting Crowns' "Glorious Day" may look a bit dated, but this song was a hit this year (I would have preferred "Courageous," though). Chris August became an instant fan favorite with his "Starry Night," which is no surprise that it is repeated on this year's WOW, and after his "Candy Wrap" single and video, I am sure Chris August is going to be a name even the mainstream market will recognize. However, "Love Has Come" by Mark Schultz, already on last Year's WOW, makes no sense appearing this year also, and RED's "Not Alone" is more well deserving than "Faceless." Britt Nicole's "Hanging On" was a single last year, and I would've expected Jeremy Camp's "The Way" over "Jesus Saves." Notable absences were also Mikeschair's "Someone Worth Dying For," Steven Curtis Chapman's "Do Everything," Hawk Nelson's "Crazy Love" and the ever reliable Michael W. Smith with "I'll Wait For You." Even Newsboys were sorely missed on this WOW ("Save Your Life"...anyone?). Yet, despite these hiccups, I would buy this WOW in a heartbeat over the previous years.

All in all, WOW Hits 2012 is the best WOW release in 5 years. Even if you have all the songs from elsewhere, I would recommend you to buy this collection and listen to it, as the order of the songs does have an impact on how you view them and the meaning you get out of them. It's a must-have album for this coming year!