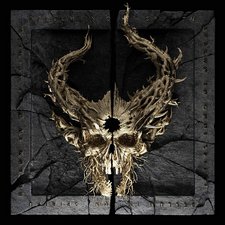 
Has Demon Hunter reached legend status yet? If not, you can't deny that they're certainly worthy of considering such a title. What started as a side project of some guys from Training For Utopia and Poor Old Lu (as well as a Tooth & Nail employee) is now reaching double digits with studio albums, and has become one of Solid State Records' most successful and loved bands of all time. For albums nine and ten, they're going big, with two albums totaling twenty tracks. (For a look at the second of these two albums, Peace, click here.)

Demon Hunter's 2017 offering, Outlive, was the band's softest release to date. It was still heavy and packed a heck of a punch, but it had a lot more singing and hard rock influence than previous albums. War feels like a natural progression. I would argue that it's (probably) heavier than Outlive, but it's not devoid of hard rock and songs with exclusively clean vocals. You might think it's an odd choice to include tracks like this when they're simultaneously releasing an album full of them; I thought the same thing at first, but then came to the conclusion that this is what Demon Hunter has always done, and it really makes War into a more well-rounded album. On top of that, one of the clean tracks, "Grey Matter," is one of the highlights of War, as is "On My Side," which keeps the musical aspect of metalcore (chugging guitars with matching kick drums) while Ryan Clark belts out his unmatched rock voice.

As much as I like Demon Hunter's brand of hard rock, the feature presentation is still in their metalcore. The back-to-back pairing of "The Negative" and "Ash" is excellent, showcasing Clark's vicious growls and screams, occasionally used in ways we haven't heard before. It's great that the band keeps finding new ways to write and play their music; it speaks as a testament to DH's longevity and musicianship. A great example of this is in "Close Enough," particularly the verses instead of the chorus. If you heard them without vocals, you might be swayed into believing that it's a band like Metallica or Pantera, with its somewhat old school metal sound. This classic sound especially stems from the lead guitar's tone and the main guitar riff during the verses. The chorus, which is actually one of my favorites on this album, brings it back to what DH does well, as the driving guitars and double bass are met with Ryan's clean vocals, and it's excellent.

It's always a treat when Demon Hunter steps out of the shadows with new music, and War and Peace are no exceptions. I've definitely listened to War a lot more than its counterpart, though, so if you can only afford one (and yes, you should buy it), this would be my personal recommendation. But either way you go, you can't go wrong.

Demon Hunter has achieved something so many bands strive for, and that is the ability to last almost 20 years while still pumping out fresh sounding releases every other year. War could possibly be their best release since The World is a Thorn, and this might be a little too soon to make this analysis, but I feel this might be even better with more variety as it kind of merges the best attributes found in the aforementioned album and Outlive. You will get a nice dose of metal with songs like "Ash," recalling memories from Metallica's Ride the Lighting days, and "Unbound." In addition to the previous songs mentioned, some of the album's greatest moments are found in "Cut to Fit," "On My Side," "Close Enough," "Grey Matter," "The Negative" and "Lesser Gods;" that's pretty much the whole album, but it's that good and is one of the strongest releases in Demon Hunter's discography. - 2/28/19 Wayne Myatt

War is a delightful throwback to Demon Hunters sounds of the aughts, but it also is able to work in a number of fun creative flairs. Close Enough features the type of technical guitar work you might hear on the more popular metal acts from the 80s, while The Negative and Ash are deliciously heavy and give Ryan Clarks unclean vocals a great workout. And then there are songs like Grey Matters and Lesser Gods, which both roll into one complete package everything that fans know and love about Demon Hunter. At a brisk ten tracks, War is almost over too soon and you almost wish you could hear more (but I suppose thats what Peace is for). This is an excellent album that you wont want to miss. - 3/2/19 Mark Rice