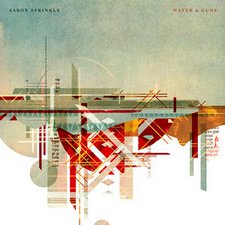 Aaron Sprinkle's producer credits are extensive. He's worked on projects for Anberlin, Falling Up, Emery, and dozens of other spectacular bands mainly associated with Tooth & Nail records. It seems when his hand is behind an album, the chances of its greatness are greatly increased. However, when he himself helms a release, it is especially great. In the early 2000's, Aaron delivered solid acoustic material, but, recently, his work with the alternative rock band Fair has been nothing short of fabulous. Now that he's solo once again for his latest release, Water & Guns, has anything changed?

Fair fans should breathe easy, because Water & Guns is the perfect sequel to Fair's Disappearing World. This project has all the piano driven indie pop charm from Fair with enough electronic flavor to keep it fresh and progressive. For example, the opener, "Heatstroke," strikes the perfect balance of piano pop/rock with an electronic influence that sets the tone beautifully. Although the synthesized music is often used in subtle, but masterful, brushstrokes across the album, sometimes it's a bit too noticeable. In the best way, Disappearing World felt very organic, but the synth-laden vocals in the chorus of "Can't Last Forever" here divert too much attention to itself.

Not a single song on Water & Guns is filler. From start to finish, each track is crafted with the utmost care, and Aaron polishes each obscure moment and fills them with intricacy. His soft, emotional vocals drive the bouncy pop tune "Whisper Something" while the seamless "I've Missed You" features an aggressive piano/percussion combo that highlight its remarkable chorus. Although the whole album might be a musical highlight, "River & Lead" has a catchy seriousness to it (similar to "Wayside" from Disappearing World), and its fast-paced refrain distinguishes it. Speaking of excellence, the near ballad "Giving Up The Gun" marries the perfect amount of synth with Aaron's sincere vocals.

One minor trouble might be the uneven tone in "Later On." Another downside might be the finale, which doesn't quite live up to Disappearing World's "Anymore." Still, "Washboard Road" is good and intriguing even if it's not the greatest of closing songs.

If you've followed Fair's discography closely, you won't be surprised to learn Water & Guns isn't the most overtly spiritual album you'll hear this year. Although the theme of water and guns sprinkles its way throughout the album, the lyrics can be pretty ambiguous. "Alright" has an innate optimism to it, and "Giving Up The Gun" seems to encourage dropping our stubbornness and dissolving conflict even when we're sure of our position. "River Of Lead" is a bit more interesting with its more spiritual leanings ("I hold my breath and wait for the mountain to move/but I forget there's nothing I can do/I guess I never seem to choose a side/the conversation takes place in my mind/another chance for grace to win if I give in"), but, ultimately, the song is pretty vague.

Water & Guns is the kind of album you hope for from an artist as smart as Aaron Sprinkle, but it's also the one you're too smart to expect. His personal departure from his acoustic material to the electronic side of pop music is both seamless and flawless. Each song is a joy, and the few purely outstanding tracks on the album almost makes Water & Guns a perfect experience. It's too bad it's so hard to connect with the lyrics because this album could have been an instant classic. As it stands, though, it's one of the best albums of 2013.

If it is true that absence makes the heart grow fonder, then Aaron Sprinkle ought to be truly beloved right about now. His most recent band outing, Fair, hasn't released an album since 2010 and fans of the Seattle-native's solo records have been waiting for a successor to the ironically-titled Lackluster for nearly a decade.

For his latest offering, Sprinkle mostly trades the straight-ahead alt-pop/rock of the previous project for a comparatively subdued, electronic-driven approach, as typified by Water & Gun's opening cuts, "Heatstroke" and "Alright." Exceptions, such as the Beatlesque "Whisper Something" and the likewise superb "Turn Around," crop up here and there, but Sprinkle's new effort is, for the most part, a more subdued affair than its most recent antecedent.

Lyrically, Water divides itself nicely between the literal and abstract. Tracks like "Alright" ("When you can't see the light/ It'll be alright") deliver their messages in a fairly direct manner. Others, such as "River of Lead" ("Down this river of lead I roll/ Feel it pull me underneath") - a song about man's tendency toward destructive behavior - require a closer listen to digest their well-worded, thought-provoking themes.

A handful of the cuts edge toward the generic, and the generally muted approach does render portions of the album less than thoroughly memorable. But even if it isn't quite as forceful or consistently engaging as Lackluster, given time and multiple listens, Water & Guns is sure to win over even the most discriminating of pop lovers, particularly those who have waited so patiently for its talented creator's long-overdue return. - Bert Gangl, 9/30/13