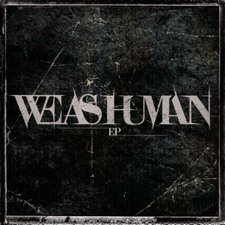 Following two less-than-stellar releases, We As Human finally releases an EP on a major record label (Atlantic, home to Skillet and [formerly] P.O.D.). As a result, the production and songwriting are far superior than their previous recordings.

The We As Human EP opens with "Sever," a riff-heavy rocker about God exposing the sin in our lives, and us willfully cutting that sin out of our lives. The single, "Dead Man," closes the EP on a similar note, declaring that we can only be alive after God removes the sin (the "dead man") from us.

Of the two songs in between, "Living Lies" and "Double Life," the latter is easily the stronger of the tracks. The song is from God's point of view, to someone harboring a secret sin or vice, and shows it with lyrics like "Don't pretend that it never happened, I was there and a I know what you did." "Living Lies" is the weakest track on the album, but is still infinitely better than anything from their first couple releases.

The main trouble with this EP is, with the style of music We As Human plays, it is near impossible to be creative. Certainly, this EP is nothing groundbreaking. On the other hand, if you're looking for originality in music, your ship sailed about 40 years ago. We As Human does what they do well, without having a sound that can be pinpointed on any one particular influence.

So, now they have their first major label release. They've even opened for Skillet. After some experience, they can write some pretty tight songs. This is definitely a band to keep an eye on in coming years.