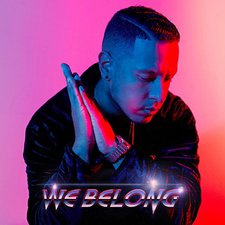 
For nearly ten years, fans of Reach Records have known the Bronx-born Gawvi by his signature producer tag and undeniably tight beats. After a long period of working for Reach as a staff producer, he was officially signed to Reach in January 2016, in hopes of pursuing his own musical direction in pop and dance music. After producing songs for over thirty different albums and creating two solo EPs, he is finally releasing his debut solo album, We Belong.

The album starts off with a collaboration with ELHAE, called "Rock N Roll." The song is decent, but it doesn't quite set the mood properly for the album and is quickly overshadowed by the following track, "Godspeed," which features a banging dubstep-influenced beat and solid verses from labelmates Andy Mineo and KB. "Godspeed" introduces some of the best songs the album has to offer, continuing with "Like We Belong." This track is certainly one of the best things that Gawvi has ever created, with an extremely danceable beat, excellent lyrics, and vocals from Jonathan Thulin. "Show Me," which features a guitar and horns, and "Never Fails" are also fun songs, with worshipful themes and lyrics.

Although We Belong is largely a fast-paced dance pop project, it has its slower, more contemplative moments. We see Gawvi orchestrate the first of these in "Giana," a song for his one-year-old daughter. If a track like this is executed poorly, it can just feel like someone singing about a hypothetical loved one, but Gawvi makes "Giana" a moving song because you can truly feel his love for his daughter through his passionate lyrics. And while some songs of this type feel out of place in a more up-tempo album, "Giana" perfectly balances emotion with energy, making it an album highlight.

The tempo picks back up in "The Sickness" as Gawvi once again hands the mic to another artist, this time, Jordan Powers, who complements the intense beatwork quite well. "Closer" follows up well with a piano intro and an infectious synth line. It's the only song on the album besides "Godspeed" that features two artists, and Robbie Lee and Julia Leilani work well together to make the song not only a fun song but a moment of worship.

A couple tracks later, we find another album highlight in "En La Calle," a fusion of Latin pop and dubstep that's a good listen, whether you're a Spanish speaker or not. More dance staples follow in "Feel It" and "Something About U." On "Cumbia," New York-born rapper Wordsplayed adds his usual fun and casual style to Gawvi's great beat, which features an accordion, of all instruments. It also features a subtle nod to the Tejano singer Selena Quintanilla-PÃ©rez ("Selena would have loved this"). Interestingly, We Belong's release coincides directly with the twenty-second anniversary of Selena's infamous murder. It seems fitting that Gawvi and Wordsplayed, two artists influenced by Latin and Tejano pop music, would include such a tribute to one of the genre's legends.

The album closes with "Hold On," which is the song on the album that's the most directly worshipful, mentioning the name of Jesus and featuring some great lyrics about the love of God. With a runtime of 6:09, it begins to drag a little near the end, but it still finishes the album decently enough.

As of yet, dance and EDM have not been at the forefront of Christian music, aside from success by Owl City and Capital Kings. Gawvi, by extending Reach Records' influence into pop, has brought a large group of people (Christian and non-Christian) fun and meaningful music. This album has its flaws, to be sure; some of the songs are a tad repetitive and not every song features a great deal of lyrical depth. But the fact is, it's a dance album at its core, and for that, it works perfectly, rivaling the best of Christian and secular alike. If this is what we are to expect from Gawvi from here on out, then I say "Gawvi, get 'em," indeed.