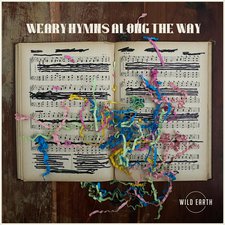 
Indie-worship band Wild Earth have been drifting in the background of the bigger names in the worship genre for nearly a decade now, but have consistently put out solid content that deserves more attention. A mix of techno-keyboards, zany drumming (think early Mutemath), and reverb-saturated guitars provide an eclectic backdrop for Micah Bentley's poppy vocals. Their latest venture, titled Weary Hymns Along The Way, is filled with imagery of strength for the long journey, ala Pilgrims Progress, and should be placed far away from what would usually be considered "hymn-like."

Opening with the electro-pop "Dark Night Of The Soul" we're introduced to a nameless character in the middle of an arduous journey, crying out to God for help, but feeling no relief. This experience is traditionally known as the "dark night of the soul," and is something many Christians have, or will go through. The song provides hope and reassurance that God indeed had never left their side, "only in darkness could I find/that You've been with me the whole time/leading me into a new light/it's here I've come to know/fear not/take hold/on the dark night of the soul." These themes are heard throughout this brisk album, continuing in "Wake Me Up (Maranatha)," which asks God to reveal things in the spiritual realm so we don't become complacent and live for only material things, "give me sight for what is hidden/to receive what has been given/wake me up." Next track "Hope For Me" sees slight progress in our character's journey, as he learns to give his struggles to the Lord, "you know that my light is fading/so I let go of expectations." I especially enjoyed the positive, almost punk flavor of this song, with fast moving drums and soaring guitar leads in the chorus, that echoes the freedom our journeyer is experiencing.

"O The Mystery" brings off-kilter time signatures, lightly stringed synths, and "blink and you'll miss it" bongos to enhance the, well... mysterious connection between doubt and trust, "from the ashes of my doubts/hallelujah singing out/on the days of unbelief/hosanna now repeats." The first song to divert from the main theme is "This Is Glory," which begins where you would expect a normal pop-praise song to, but a few "out of key" chords, 80's-tinged synths, and a killer guitar lick prove that Wild Earth has no intention of being labeled "cookie cutter." The best part of these divergent streaks are that they're nestled within structured songs and catchy choruses that are very easy to latch onto. "Carry It On" gave me strong Switchfoot vibes, with Bentley's vocals bringing Jon Foreman to mind. The chorus urges God to continue his work of sanctification "to completion," and the extended bridge builds and builds in confidence as our character is finally learning the art of complete surrender, in what is certainly a highlight of the project.

The final two tracks were my favorite of the bunch, both of which serve as a sort of reflection from the long journey. "Peace Be With You" is upbeat and encouraging, using fast acoustic guitars and alternating time-signatures to strengthen others still in the midst of the strenuous path, "as you wander down the path in patience/as you hope that none of this is wasted/as you long for something that's not jaded/peace be with you." The title track is the most subdued of the bunch, showing a more mature, learned, and trusting individual, weathered from the long journey, yet now able to commune with God like never before. In fact, the epilogue is the only time on the album that God speaks, proving He was at work all along, "let all your troubles out/sing your weary songs/you are safe and sound/right where you belong."

Weary Hymns... shows songwriting range I haven't seen from Wild Earth before. Their ability to create a quasi-concept album within a pop setting was more than I hoped for, and the shorter run-time helped to keep every song focused and connected to the main theme. If you're looking for just a fun, upbeat pop album, this probably won't suffice, but if you're an alike weary traveler, or enjoy digging into deeper storylines (especially one so relevant to the Christian life), I'd highly recommend this record.