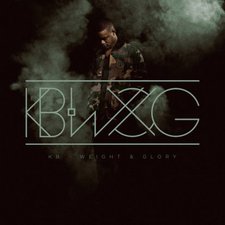 24-year old Kevin Burgess, better known as KB, has been making waves with his guest appearances for a couple of years now, most recently with Trip Lee (and Andy Mineo) on "One Sixteen." KB finally has a chance to put his skills to the test in his debut LP, Weight & Glory. To do so, he called in the cavalry to support him. The entire 116 crew was brought in (except for PRo), and the entire High Society Collective (except for JR) is featured along with some other talent.

KB has become known for his fast flow and there is no shortage of it on this album, but he does a nice job of working it in and not relying on it as a crutch. At first listen, there wasn't much that stood out, but with subsequent listens it began to really shine. The first five tracks are about as solid as you can get, especially tracks four and five. "Don't Mean Much" has a rock feel and features Sho Baraka and as well as Mitch Parks from After Edmund on the chorus vocals, while the Tedashii and Andy Mineo featured "Go Off" is easily an album best.

The next three songs slow the album down a bit, but they each bring a solid message. The stand-out of this trio has to be "Open Letter (Battlefield)." In the song, KB sits down with Swoope and Trip Lee to read and pray over some fan mail. Both of the letters read in the song (the first by KB, the second by Swoope) circle around lust. The first takes an unexpected turn as KB reads, "I know when I'm lusting I'm sinning, but my lust here is different. Since I've been so alone I kinda long for the touch of a woman." The girl explains the struggle with her sexuality as the lyrics discuss an issue I've never heard tackled in other songs. The second letter revolves around a guy and his fiancée as he explains sexual urges, his strong desire to remain pure, and the thought that his fiancée is basically his wife already. Trip then finishes things off with a prayer. The chorus says it best, though, as the following lyrics are sung, "There's a war inside my heart and mind every day I fight it. So make me align to the truth and rely on Your spirit inside me. War. War. War. War. War. War. Life is a battlefield."

"Angels" picks it back up again as another great message and an album favorite. The lyrics talk about no matter how great you are on this earth, you are nothing compared to God. KB proclaims, "Gotta lotta money. Gotta lotta clothes. Everybody know ya everywhere ya go. You keep getting praise all across the globe... They ain't got no angels praising him they not tha man." Skip one forward after "Angels" for the most fun song on Weight & Glory. "Church Clap" features Lecrae and a major gospel sound on the chorus. The song starts out, "Gimme that God Almighty, that good ol' Bible, that old school doctrine." If the opening line doesn't hook you, KB and Lecrae should later in the song as they rap about the excitement of an old school gospel church service.

Every time it seemed I wanted to skip a song, something would catch me; it may have been a lyric, a beat, or particular flow, but each and every song grew on me. In fact, the only track that fell a little flat was the "Zone Out" remix; it has more of rock feel than the original, but it just seemed a little unnecessary. Then again, I'm not a fan of many remixes. This album has been anticipated by Reach Records fans for a while now. If you were unsure about this fast spitter on his own, there is no reason to doubt. Weight & Glory is loaded with great messages, tight flows, and excellent collaborations. This is one of the best debut albums you could pick up, especially in this genre. KB could have easily fallen on his face under the expectations, but instead he hit it out if the park. What's the best part of the whole thing? KB's heart.

For the longest time, Reach Records was just four dudes: Lecrae, Trip Lee, Sho Baraka and Tedashii. In the last couple of years, the label has grown and added a few more artists to their roster, one of which is Illinois rapper KB. His first official release with Reach (outside of his Who Is KB? mixtape last year) is called Weight & Glory. The album starts off relatively strong with "Weight Music," that features a solid flow and a worshipful message. A few of the tracks pack quite a punch, such as the aforementioned "Weight Music," the rock-infused "Don't Mean Much" and the mile-a-minute flows from guest emcees Andy Mineo and Tedashii found in "Go Off." Like most albums from Reach, the track list also doubles as a guest list, as KB brings along a bunch of friends to provide guest vocal spots. Trip Lee shows up a couple of times for "Open Letter" and "Angels," the latter of which also features a speedy verse from Clear Sight artist Flame. Lecrae, who usually ends up being one of the highlights among guest verses, provides a rather forgettable appearance in "Church Clap." "Don't Mean Much" features Sho Baraka and Mitch Parks from After Edmund on the hook. Parks adds a great element to the song, and goes very well with the rock flair of the track. The best part about Weight & Glory happens to be the message. The music is decent (strong on a few occasions, but not too entirely often), but the message is consistent throughout. "Open Letter" addresses the difficult letters that KB gets from struggling fans as he offers up his advice and prayer, while "Hello" is a reflection on God's mercies, which are made new every morning. The official closing track, "Here We Go," is another worship song that focuses on how good the Lord is, especially in comparison with the other "good" things about life. KB is a good addition to Reach Records, and he fits in well with his brothers there. Weight & Glory is less than great, but it's a fairly good start, and it will no doubt be welcomed by those who follow Reach's artists pretty closely and who've wanted to see the label grow and add new talent. Check out KB's debut if that's you. - Scott Frybergerr, 7/10/12