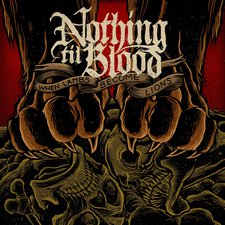 Nothing Til Blood
When Lambs Become Lions

Formally known as Aim For The Day, one of the newest signings to Strike First Records is a young band called Nothing Til Blood. As Aim For The Day, they released one album, and are now ready for their national, major label debut under their new moniker. The album, titled When Lambs Become Lions, is mainly hardcore, but also boasts a tinge of punk, and a few other surprises along the way.

The great majority of When Lambs Become Lions is in the hardcore realm. Like a lot of their labelmates, there are lot of rough screams, chugging guitars and heavy drums. It also has its fair share of gang vocals in tracks like "Entitled," "Lambs" and several others throughout. In addition, there are some mellow times, like in "Gabriel," where the music drops down to some mild indie rock, and vocalist Amadeus Pryor almost goes into pentecostal youth pastor mode. He starts speaking as if preaching at a church camp or youth rally. His passion is noticeable, and appreciated, but the whole thing seems a little out of place for the album. The following track, "Lions," starts off in a similar manner, but with heavier music, and the rest of the song resumes what we've heard in the preceding tracks. The closing song, "Depths of the Sea," does the same thing vocally, but it's also an acoustic track that borders on being a worship song. It takes the album out on an unexpected note, but a very good one.

Between the music and the vocals, the music ends up bearing more of the album's strength. The music is pretty solid, with very little noticeable flaws in musicianship. It still needs some refining, but that's pretty expected for any band that comes onto Strike First's roster, as that's where the bands take time to work on their craft before coming on board with Facedown. On another note, the music also feels stronger based on the vocals. Pryor's vocals aren't bad, but they are slightly weak. On the plus side, it's something that I can imagine would improve more with future albums and performances.

Nothing Til Blood is a good addition to the Strike First label. The label seems to be a good fit for them as well, as they really do take time to work on their talent before sending them off to the bigger Facedown imprint. Nothing Til Blood's overall sound doesn't stand out too much, but they've put their hearts into what they do have, and I have to respect that. I'll be keeping an eye on them in the future.