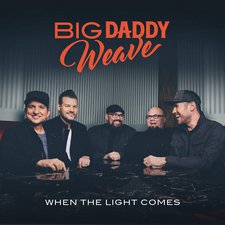 
Big Daddy Weave is just about as dependable a band as you're likely to find. Consistently releasing appealing pop-rock that is not beholden to the "sound of the moment," the band has been making widely-liked music for nearly two decades now. Featuring the fine, husky voice of lead singer Mike Weaver (the titular "Big Daddy" himself) and a consistent lineup since the beginning, the band has won fans the old fashioned way: with good songs, hard work, rugged touring, and most importantly, a laser-like focus on the Gospel.

When The Light Comes continues this career theme, and while there is nothing surprising for fans here, there are a number of great songs with good production and performances all around. Lead single "Alive" smartly kicks off the album with an up tempo worshipful punch and great vocal delivery from Weaver. The title track uses a thumping bass drum (in the mold of Mumford & Sons) to build a barn-burner of a tune that manages to sound old-timey and fresh at the same time. The band's southern background further comes out with the banjo and country music vibe of "What I've Got," a light breezy tune that sounds like Jason Mraz crossed with Tim McGraw. Other highlights include the synthesized beat of "Pursuit" and the uplifting closer, "Fly."

In between these highlights are unfortunately a few pedestrian tunes, like the slightly underwhelming "I Know" and "The Name Of Jesus." But on balance, When The Light Comes is a solid outing for the band, one that will surely connect with current fans and build the band's reputation for shining "the light" in a dark world.