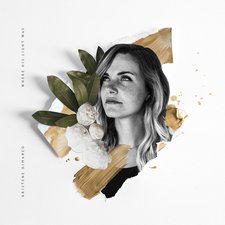 Kristene DiMarco
Where His Light Was


Kristene DiMarco is a worship leader and songwriter who joined the ever-growing stable of artists signed to Bethel Music at Bethel Church in Redding California. She joined the Bethel Music Collective in 2016, and is best known for her song "It Is Well," which was featured on Bethel Music's 2014 release, You Make Me Brave. "It Is Well" is still being sung by churches the world over, and impacted radio on the Billboard magazine song chart, Hot Christian Songs, reaching a peak of No. 27. This album, Where His Light Was is Kristene's fourth solo offering and with it we get a strong vocalist offering worshipful encouragement to listeners on overcoming fear. So this reviewer's main question going into this newest album was would her solo style match her partnerships with Jesus Culture and Bethel Music? Or would she dare to step outside those familiar sounds and topics? What listeners ultimately get is a nice balanced mix of pop, worship and some rock musicality with lyrics intended to encourage listeners on an individual basis versus a corporate church gathering.

Kicking off the album, we hear a subdued a capella version of the "Doxology" with the slightest hint of reverb, which is a unusual choice, but ultimately works for this reviewer. The title track, "Where His Light Was," follows with auto-tuned vocals reminiscent of Imogen Heap's song, "Hide and Seek," and a march-like drumbeat. She states with a seasoned authority that, "Never an/orphan, never without Him/Looking back now I see where His light was/Ever before me, ever behind me/Looking back now I see where His light was." The issue here is not the song itself but its placement in relation to the first track, "Doxology." The main problem is the tone set is broken from track to track and feels awkward. Perhaps a different placement in the track list would have served it better. "Take Courage" is definitely the most arresting and radio ready song of the album with its encouragement to, "Slow down, take time/Breath in He said/He'd reveal what's to come/The thoughts in His mind/Always higher than mine/He'll reveal all to come." Next track "Never Ever" builds from the slow beginnings of simple piano to bigger swells as she sings with a reassured faith, "But I'm held so close, that I can't fall to pieces/When I'm fragile You're invincible/The only One I know that can hold my whole world/Never ever have You ever failed to come through." She uses electronic drums and touches of auto tune to great effect, contrasting the strength of God with her own fragility. "I'm No Victim" is a song of confident declaration that says in the first verse that, "I'm no victim, I live with a vision" and crescendos in the bridge with the lyrics, "I am who He says I am/He is who/He says He is/I'm defined by all His promises/Shaped by every word He says." Another song worth noting is "Your Love Stands Alone," where Kristene's vocals and musical diversity stand out. The power of her voice matches the intensity of the music as the drums and strings push forward the melody in a more rock-oriented way akin to older Plumb or BarlowGirl material. This style of music suits her voice well and she would do well to do more songs in this vein in the future. Lastly, "Could You Be This Good" asks a rhetorical question in a joyous way with the lyrics from the chorus, "Could You be this good/Could You be this good/The way that You forgive me/The way that You hold on to me/Could You be, could You be this good."

Though there is an occasional slip into lyrical clique, and an awkward transition with the album's first two songs, Kristene gives listeners a solid release in Where His Light Was. Her use of auto tune is just enough to give different textures to some songs without overdoing it to the point of distraction. She has a powerhouse voice, but it never comes off as showy or unnecessary. The message remains on point, striking at the heart of fear by reminding listeners that God is present, we are His children, His light shines into darkness, and His plans are good. These are messages that should never grow old, and DiMarco offers just enough musical diversity to keep from the sameness that characterize many worship offerings. This one is definitely worth checking out for fans of Bethel, Jesus Culture, Hillsong United, and Plumb.