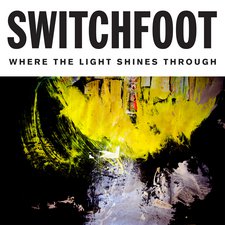 Switchfoot
Where The Light Shines Through


In Jon Foreman's TED talk at the University of Nevada, called "Live Your Song," he walks through the progression of life as a tune unique to every human, including what to do when the notes are sour. "When you hit the wrong notes, the song continues. I dare you to forgive yourself; ask for forgiveness when you hit the wrong note, and forgive the people that wrong note against you. Don't let past mistakes rob the present of its potential for beauty and joy." It's this principle that is paramount to Where the Light Shines Through, another proven album in Switchfoot's legendary run.

To understand Where the Light Shines Through in the context of the band's history, revisiting 2014's Fading West might be helpful. Fading West is a tough album to judge in the Switchfoot discography because it wasn't ever meant to stand alone. Being framed behind a documentary bought some favor - it's not quite a studio album, but it's also not a full soundtrack either. But as more time has passed since Fading West's release, its distinguished quality has become more clear. It transitioned Switchfoot's creative direction from aggressive, grunge-tinged grandeur to pensive, traditional pop/rock, and that's especially apparent with Where the Light Shines Through. It feels like a natural successor to the surfing sensibilities of Fading West; it is calmer in its demeanor, inviting the listener to join the Foremans and their crew at a beachfront campfire to consider life's purpose carefully and intentionally. The stories told here don't happen on the water, and therefore, it's not splashy. When the title track examines the meaning of pain and suffering, it's not a song of thoughtless, "tough-it-out" resolve, but instead a choice encouragement and hope over regret and victimhood.

Because this effort isn't seaworthy, however, not every song leaps off the tracklisting. Song structures like in the title track and "Live It Well" (a single which feels a bit redundant after Vice Verses' "Thrive") do seem simplistic for a band's tenth album, and even "I Won't Let You Go," one of the album's most memorable tracks, feels somewhat standard as a ballad with its strings incorporated throughout. The slow burners "If the House Burns Down Tonight" (a tribute to Jon Foreman's wife) and the triumphant "The Day That I Found God" aren't musically memorable at first, either, but Foreman's songwriting wins the day in these instances; the latter track expertly articulates the tension between human weariness and divine trust ("Where is God out in the darkness?/'Cause the voices in my head ain't talking honest/They're saying maybe you made us then forgot us/But that ain't you"). Of course, with a band as perennially heralded as Switchfoot, even the less impressive tracks are better than most others', and subsequent listens to the entirety of Where the Light Shines Through prove this album's durability.

"Holy Water" is an imposing opener and is the most intense on the album, featuring the dirtiest (for the lack of a better adjective) guitar work here. Immediately following is "Float," which is reminiscent of "The Original" from Vice Verses; it's a quirky track with fun percussion that makes the album's beginning feel fresh and inviting. Similarly, "Bull In a China Shop" centers around Chad Butler's drumming that makes the track lively, but not without some potential for long-term earworms. Another highlight is "Looking for America," which asks questions about the United States' status as a strong, but deeply flawed, project ("America who are you?/Do you get what you deserve/Between the violence and entitlements/Which nation do you serve?"), and chooses something greater than a country built by humanity ("I'm singing farewell my utopia/Farewell my euphoria/'Fare-thee-well' my suburban day-dream"). Lecrae's featured rap on "Looking for America" is a landmark, timely addition here, winsomely questioning a happy-go-lucky view of the USA. The closing track, "Hope is the Anthem," takes a similar approach to both "Where I Belong" and "Red Eyes," though perhaps not in as grand of a scale. In pure Foreman fashion, the theme of a heart's song appears here with a fury ("My heart is beating like a blown speaker/The spirit is willing but the flesh is weaker/A distortion pedal and a pair of wings/And an anthem played on broken strings"). An ever-so-faint echo of "like holy water" in the waning last seconds of the song, and just like "Holy Water" declares at its start that "hope deserves an anthem," everything comes full circle.

These things are hard to predict, of course, but in a few years, Where the Light Shines Through might not be seen as the most seamless of Switchfoot's work. The trademark, "Switchfoot-sound" grunge is missed, and some songs could be more impactful with some extra power behind them. Nonetheless, it indicates a quiet brilliance that's been key to the band's enduring success. Almost twenty years after The Legend of Chin, Switchfoot has only grown to be a band of sage wisdom and instrumental excellence, and in an age where artists come and go with varying degrees of fortitude, Where the Light Shines Through is a remarkable effort in its own right. class="coversize" align=right> The term "the Switchfoot sound" gets thrown around occasionally, but we may not realize that it is a lot more variable than their famous discography suggests. Hello Hurricane and Vice Verses articulated what "the Switchfoot sound" could be in its highest gear, and after taking a break from the traditional album format with the documentary and accompanying soundtrack, Fading West, Switchfoot is back in action with Where the Light Shines Through, an admittedly tricky album to evaluate based on the band's musical journey. As pre-released singles have already demonstrated, the most obvious observation early on is that there are fewer gritty guitars and a lot more graceful melodies, resulting in a markedly mellow approach. Opener "Holy Water" is the closest the album gets to the band's signature grunge vibe, and most of the album's remainder feels reminiscent of both the band's pre-Beautiful Letdown days and the occasional restraint from Hello Hurricane; there's an uncanny simplicity found here beneath all of the layers of instruments, and that's the album's defining outlook at first. Perhaps the most memorable tracks in the early listening stages are "Float" and "Bull in a China Shop," which major on infectious percussion and groove. And it's all balanced out by Jon Foreman's nuanced and always-applicable pennings present here, such as the timely "Looking for America" and the inspirational "I Won't Let You Go," "Live It Well," and "Hope Is the Anthem." Where the Light Shines Through feels like a slow burner, but with time to marinate, it's poised to be a landmark album of the summer... --->

There are bands that literally make up large portions of a person's life-soundtrack. When "that" song comes on, you're transported back to that one summer vacation that changed your life. For this reviewer, Switchfoot fills a large portion of my musical soul. Continuing down the route of nostalgia, Where the Light Shines Through is quite possibly one of the greatest throwback-esque albums the band has put out to date. Listeners that have loved Switchfoot since the beginning will be pleasantly surprised and hopefully excited about the historical undertones that the album carries. Beginning the album perfectly is "Holy Water." The song carries the same clean aggression that made Nothing Is Sound so powerful, but this sounds more honed and polished without diminishing the quality. Tracks like "Where The Light Shines Through," "Bull In A China Shop" and "Healer of Souls" have that fun California sound that pre-Beautiful Letdown albums had. Lovers of the band's classic ballads will be really impressed with the beautiful "I Won't Let You Go." Jon Foreman's vocal range is on pure display, making the song one of the band's most beautiful ballads since "On Fire." A special note has to be made for "If the House Burns Down Tonight." It seriously features some of Jon Foreman's finest lyrical writing, a melody that is as catchy as they come, and amazingly weighty and strong vocals. Furthermore, the message is clear as Foreman sings, "You possess your possessions or they possess you." If that's not a jab at our materialistic hearts, I don't know what is. The album closes with the rich psalm-like "Hope Is The Anthem." The band is known for always finishing strong, but what makes this conclusion so rich is that it is filled with a healthy balance of reality and hope; much like the entire album. Hope isn't marked simply by positivity, but acknowledging pain while clinging to what is greater, "The Spirit is willing but the flesh is weaker." I think this tenth album is something way bigger than we all might be expecting; it's some of the most spiritually infused and hopeful content the band has ever delivered. If this is where the light shines through, we're in the right place. - 7/7/16, Ryan Barbee of Jesusfreakhideout.com

Where The Light Shines Through is an amalgamation of everything fans love about Switchfoot--universal messages of hope and love supported with poetic and intelligent songwriting, tenderly husky vocals from Jon Foreman, and expertly crafted pop/rock and alternative rock soundscapes. It may not be a home run like a couple of their previous albums, but from start to finish it is thoroughly enjoyable, and even inspirational at times. - 7/6/16, Christopher Smith

For the band's 10th studio album, Switchfoot makes a few nods to past sounds while making a few strides into new territory (like including rap with Lecrae's guest spot on "Looking for America"). The album gets a little funky--with tracks like "Float" and my personal favorite, the rocker "Bull In a China Shop"--but also delves into some CCM radio ready tracks like "Live It Well" and the closer, "Hope is the Anthem," which feel a little out of place on the album but remain good songs on their own. Still, "Hope is the Anthem" doesn't quite have the inspirtation and emotion-tugging punch of "Where I Belong" (or the title track) from Vice Verses, but slower tracks like "The Day That I Found God" and the encouraging "Where the Light Shines Through" give the album some meatier material. Throw in the slow-building rocker "If the House Burns Down Tonight," and the sum of Switchfoot's latest offering is a musical highlight of the 2016 summer. - 7/7/16, John DiBiase

Since The Legend of Chin released back in 1997, Switchfoot has produced some of the most inspiring and challenging music in the industry. Where the Light Shines Through, the band's tenth studio release, isn't ending that streak. Songs such as "Holy Water," "If The House Burns Down Tonight" and "Healer of Souls" stamp the album with the band's signature rock sound, while "Float" and "Bull in a China Shop" provide some refreshing funk influences not heard since their early days. Although it isn't their most consistent record ("Looking For America" is of particular note), Where the Light Shines Through is yet another shining achievement. - 7/11/16, Lucas Munachen