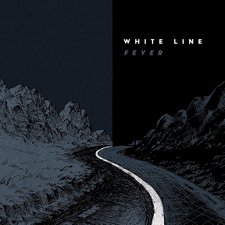 
With a full-fledged podcast network, burgeoning families, and impending mid-life crises, one might expect the emo kings in Emery to slow down with their musical output. The opposite seems to be true. Last year, they announced their intent to release an annual album that first comes in the form of quarterly EPs to those subscribed to their interactive online community, Emeryland. Time will tell if that pace will run their creativity ragged, but as for White Line Fever, the boys have utilized maturity and experience to tell their "origin story" in a less flashy, more emotional manner.

The dominance of streaming has turned many bands down the road of putting out quarterly EPs and multitudes of singles. Personally, I was worried that this release format would lead to a disjointed album from Emery, but again, the opposite seems to be true. The tracklist is centered around the beginnings of the band and all of the drama that surrounded leaving their small town lives and diving headfirst into the risk of starting a rock band. This theme makes for compelling songwriting, and if you're a long-time fan, you'll doubly appreciate the extended insight into the band's self-reflection. The narrative lends itself to the more balladeering side of Emery, which they lean into heavily, trading energy for heart. "This Town" doesn't seem like an attention-grabbing thesis of an opener, but it smartly lays out the roadmap of pianos and soft rock melded with the band's trademark battling vocal duets that characterizes most songs here.

Nostalgic emphasis doesn't prevent the musical tonality from painting a very melancholic, somber picture. "Some of Us," "2:38," "Civil Wars," and so on cement the weight of these events under Toby and Devin's particularly dramatic wails. Sometimes the emotion can be interpreted as tiredness, which makes this a less exciting release from Emery, especially coming off of the variety of You Were Never Alone and the innovation of Eve. A couple of the songs are surprisingly straightforward in their pop sensibilities (look out for "Now What" and "Sad Season"), but Carter always does enough to keep things interesting, be it through chromatic progressions or varied structures. There are a few surprises here - the punk-inspired verses on "The Road Beneath My Feet" come to mind - but creatively, the choices largely feel subdued and safe.

Despite the lack of memorable moments, White Line Fever is sure to be a fan-pleaser. It's easy to feel connected to the band when they're telling you their origin story. Additionally, this release musically harkens back to the sound of their early era, albeit with a more grown-up restraint. "The Noose," with its blunt lyricism, meter shifting, and upbeat outro, feels like it's pulled straight off of The Question. White Line Fever proves that the band doesn't need to be screaming about romantic woes in order to cut straight to the heart.