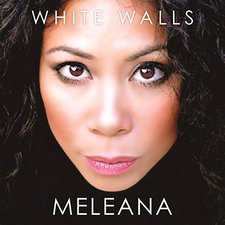 
Hailing from the ever beautiful Island of Hawaii, pop singer Meleana Brown recently released her debut record, White Walls, through the continually expanding and innovative Dream Records. Outstanding vocals and an infectious sound slightly reminiscent of Britt Nicole's latest effort helps draw the album into the small crowd of Christian artists willing to forsake CCM's forcibly emotive sound. But unlike Nicole's release, White Walls often feels like it's still in the process of finding this sound, which may be the album's biggest drawback.

"Live For You" and "Surrender" introduce this struggle from the outset. Although they're complemented by pop's signature finger snaps and synth beats, the melodies, in an attempt to be worshipful, end up sounding dry. The problem these songs have is trying to force a worshipful aesthetic into a sugary sound. "Surrender" suffers less in this regard due to its danceable chorus, but the influence is still present.

Despite an uneven start, this contradiction in sound is barely present on following tracks. The title track is sure to be an album highlight. Meleana's vocals shine on the chorus and the emotion comes through loud and clear. Additionally, the song is supported by a creative metaphor of surrender equating to giving God a white wall to paint His will and plan on. "Through the Storm" and "Author" continue in the same vein. Unfortunately, this highlights another setback with White Walls: its predictability. The majority of the album utilizes the simple structure of a slow verse and a grandiose emotional chorus. There's nothing wrong with this, but when eight of the ten songs rely on the same structure, listener engagement is difficult to achieve.

When the album does fork away from the traditional, the results are excellent. "Dear Mirror" boasts an exceptionally fun chorus carrying relevant lyrics of self-image and confidence. This reviewer's personal favourite is the Hawaiian-flavored "Hideaway." A wonderful ukelele lazily drifts through the verse and chorus as Meleana sings about romance and intimate memories. It's the first time we hear a sound unique to Meleana and it's nothing short of fantastic.

As a debut, White Walls is satisfying, but there is much room for improvement next time around. A little more focus on developing an original sound and identity will aid her next batch of songs immensely. Until then, White Walls is a recommended listen to pop fans and CCM listeners, but if you aren't interested in those genres, you can safely pass on this release.