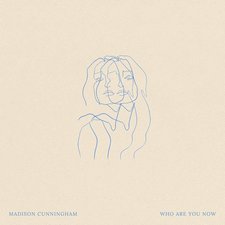 Madison Cunningham
Who Are You Now


Madison Cunningham may not yet be a household name, but for a 22-year-old, she's garnered quite the musical pedigree. Going from worship leader to regular feature on Live From Here with Chris Thile, her canorous voice and nuanced guitar work makes her a prime example of how hard work and talent are rewarded in time. That being said, she could only contribute to other projects (including last year's wonderful release from The Porter's Gate) for so long before her growing fanbase would need a proper full-length. Her official debut, Who Are You Now, sees her solidifying her style as a folk singer/songwriter that shines brightest in her minimalism and storytelling musings.

With the advent and accessibility of modern music technology, most contemporary albums have overlooked the artistry of restraint. Cunningham seems keen to this trend - the album hardly ever ventures beyond the fundamentals of tight guitars, grooving bass lines, and smart drum parts. This allows the few moments of strings, piano, and some other unexpected timbres to have their proper place. The lack of excessive effects and digital instruments is a refreshing sound; producer Tyler Chester's commitment to a truly live room sound takes emphasis off of the production and places it on Cunningham's Joni Mitchell-esque vocal lines and unique guitar decisions.

Though the sonic direction makes for easy listening throughout most of the tracklist, Cunningham makes sure to turn up the emotional density when needed. Piano ballad "Something To Believe In" and acoustic nocturne "Like You Do" dissect some of love's subtleties with a dissonance that such complicated topics deserve. The first half of the album is mostly content with having fun in 4-minute grooves, but by the time "Dry As Sand" comes on, it's clear that Cunningham intends on leaving a thoughtful impact before her grasp on the listener's attention is gone.

After the dynamic experimentation and genre traversal of 2018's Love, Lose, Remember EP, I was personally hoping for more of the same sense of adventure on this record. Since Cunningham has shown that she can take her writing in many directions, that particular proposal was enticing. Nevertheless, as safe as it may seem, Who Are You Now's obligation to simplicity makes for an endlessly listenable time. This album is completely solid through and through, and since it comes so early on in her career, it works well as an opening statement: Cunningham is one of the most exciting and important young voices in music right now.