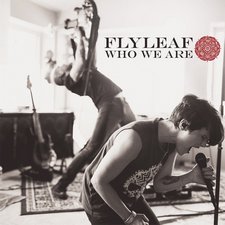 Flyleaf
Who We Are EP

Flyleaf fans were both elated and devastated last year. The band released arguably their best record to date, but lead singer and cornerstone, Lacey Sturm, also announced her departure from the band. In lieu of Lacey's exodus, Kristen May was announced as the group's new lead vocalist. Anyone wondering what the band would sound like with the former Vedera singer at the helm won't have to wait long. While Flyleaf has been known to release an EP between each album, Who We Are is a slightly different animal. This time, only one new song has been recorded while four live performances (Three songs from New Horizons and one from their self-titled debut) dominate the 5-track EP.

The opening song is a new song and features fellow summer 2013 tourmate Sonny Sandoval (of P.O.D.). While the song is undoubtedly catchy and will probably be enjoyed by many as a summer anthem, it just doesn't feel like Flyleaf. This isn't a knock on Kristen's voice, but more of an indication of the musical styling. The song is the most poppy number the group has tackled and, unfortunately, doesn't highlight Sonny's talents. The song brings a positive message and asks the question, "Aren't we all trying to become something better?" As stated previously, Sonny is extremely underutilized and just sings alongside Kristen as a regular vocalist; his part simply doesn't mesh. The track is probably meant as a simple and fun tour song in which Sonny can join Flyleaf on stage and hopefully not an indication of a new direction.

The live cuts are surprisingly good. Kristen does a proficient job in handling rocking songs like "Call You Out" and "Fire Fire," as well as more somber "Sorrow." You aren't going to confuse Kristen's voice for Lacey, but the live recordings make it seem like the group made the right choice in deciding on a replacement. While hearing anyone else singing Lacey's songs other than the original vocalist herself would be weird, the inclusion of "Broken Wings" just seems outright awkward. This song felt like a deeply personal and meaningful goodbye from Lacey to her band and fans and it doesn't seem right to have a new singer immediately jump in and sing such a personal ode.

All-in-all, Who We Are doesn't accomplish much other than letting fans know Kristen can hang with some of Flyleaf's rockers; she is still yet to prove she can handle the screams Lacey flawlessly belted out. Other than introducing Kristen and proving her a valid option, the EP does more to call into question the band's future bearing. Obviously, Flyleaf will never quite be the same without Lacey, but hopefully it doesn't mean they change up their entire musical approach. This one is a bit of a head-scratcher.

After a bittersweet 2012, many of us were curious to see what the future would hold for Flyleaf with the departure of Lacey and arrival of new lead singer Kristen. As much as I hate to be the bearer of bad news, this little EP Who We Are isn't going to clear up too many of those questions. We're looking at a five-track EP containing four live versions of previously released stuff and only one new track. EP's are a tough sell to begin with, so I'm not sure what the reasoning is behind this release.

"Something Better" is the new song, and while it flows nicely, features Sonny from P.O.D., and has a positive theme, the track simply is just alright. It's rather poppy, which may be the route Flyleaf will go from here, but I'll wait to hear a full length album before making that call. Overall, the song brings nothing exciting. I mean, do you remember what it was like when you first heard "I'm So Sick?" Sadly, this pales in comparison.

The next three tracks all hail from last year's New Horizons and are all decent renditions of the originals. Ending our quick listen is another live version of "Sorrow" off the 2005 self-titled album. This conclusion to the album leaves Flyleaf almost right where the band left off last year: with a new singer, but with fans not really able to tell what that means for them musically. I am personally excited to see where they do go, but this EP doesn't help me figure out exactly where that will be. - Kevin Hoskins, 7/9/13