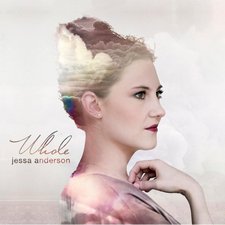 Jessa Anderson's Not Myself Anymore was a surprise from BEC Recordings in 2011. It wasn't the average contemporary pop effort, and it was enough to perk up the ears of those who normally didn't venture into her genre. Though Anderson's deal with BEC lasted only one album, a successful Kickstarter campaign paved the way for another album of original material, and thus Whole comes on to the scene three years later. It follows similar patterns to Anderson's work, though almost to a fault.

As Not Myself Anymore evidenced, Anderson succeeds at setting the mood for individual songs, creating these thoughts to be self-sustaining. What is less skillful, here, is creating an arrangement of songs that coordinate together. "Caught Me By Surprise," for example, recounts the joy of falling in love with her husband ("every day since then has been nothing but magic"). Apparently that's not entirely true, however, since "Stay" details out the struggle of maintaining a strong marriage in the midst of disagreement (But, unbeknownst to the casual listener, the song was written about a friend's marriage, not her own). It's not that either of these songs aren't truthful, but thematically, they don't seem to belong on the same album. There's often an inconsistent quality among the songs, too; "Everything," "Never the Same," "Story of Grace," and "Caught Me By Surprise" feel like paint-by-number contemporary Christian pop tracks that almost any artist could have replicated (akin to "Worship the Lamb" from Not Myself Anymore). While it definitely maintains the singer-songwriter aura, it's almost too smooth for the true authenticity of the album to get uncovered.

Listeners may recall "Fireflies" from Anderson's last album, which had a sleeker feel than any of the other songs that followed it. On Whole, the opening track "Idols" fills this role, starting with an obviously computer-generated beat and synths mix that doesn't fit well with the rest of the album's concept. Thankfully, though, the song mostly works on its own, and there are other individual tracks that do shine above the album's, well, whole. "Giving Your Heart Away" serves as a cautionary tale to young lovers relying on destructive relationships for happiness ("that's the thing about giving your heart away/you never know until you're missing a peace"), while "Breakdown" laments the accumulation of selfish decisionmaking. The closing title track leans in on some honest questions about the Christian's futile attempts to seem sinless ("In the deepest part of everything we are, we want to be enough, want our worth to show/More and more I believe that we cannot pretend to be whole"). Moments like these showcase a Jessa Anderson that wants to dig deeper than the average CCM singer/songwriter, but it's a shame that these don't happen frequently enough.

For all intents and purposes, Jessa Anderson has been an independent artist for her entire career, but an album like Whole insists on polish and consistency with past work. These aren't necessarily negative traits, of course, but there are risks still to be taken; Whole is a perfectly competent release, though perhaps Anderson can take better advantage of her independent status in the near future. There's a genuine spirit represented here that hopefully Anderson's next album will capture more accurately.