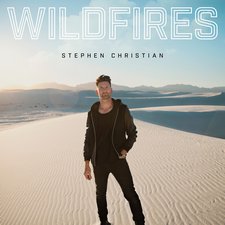 
So much of the music enjoyment experience is alignment of expectations. Artists become favorites because they develop a brand, and anything developed outside the brand takes extra adjustment from fans. So when BEC Recordings announced a forthcoming worship project from the former frontman of Anberlin and the creative mind behind Anchor & Braille, the initial reaction is to hold one's breath. The worship genre means different things to different people, but it's difficult to reconcile its reputation with the kind of music Stephen Christian has made. With Wildfires now upon us, it begs a deeper observation of the artist behind it.

At first, this entire concept of Stephen Christian releasing an honest-to-goodness worship album seems unlikely, as the "praise and worship" card has never seemed to be in his deck. As a contemporary example, it's quite easy to compare Wildfires with Matty Mullins's Unstoppable from earlier this year; both Christian and Mullins established their names years ago within heavier genres, and their self-titled solo material is a stark contrast stylistically from their previous work. The difference here is that Mullins's new material is a complete 180-degree change from anything his metalcore outfit has released (Jordan Feliz isn't getting featured on a Memphis May Fire album anytime soon). But with Stephen being associated with Tooth & Nail Records (part of BEC's label family), the cultural fit is already there. But still, what set off Wildfires?

In reality, Stephen's career has taken a surprisingly diverse trajectory; Anberlin's seven albums all saw the band in a slightly different modern rock element, and to a greater degree, Stephen's Anchor & Braille project has changed approaches with every record as his collaborators have changed. Felt was acoustic in nature (with Copeland's Aaron Marsh at the helm), The Quiet Life added more production while keeping things light, and Songs for the Late Night Drive Home centered on a twilight synthpop vibe. For Stephen, it's all about the purpose, target audience, and perhaps most importantly, with whom he's making the music. Now that Stephen is employed as a worship pastor and joined forces with Riley Friesen, a recent producer for Group 1 Crew and Family Force 5, perhaps an album like Wildfires shouldn't be as surprising.

Stephen Christian's Wildfires could be compared most closely with Phil Wickham's latest material. As a worship singer/songwriter with an especially large set of pipes, Wickham has built his career off of his soaring vocal abilities and scriptural songwriting, and that's exactly what Stephen Christian is attempting here. What sets up the album well is that all these songs were written precisely for his consistent high-rising vocals; this all adds to the project's appeal, of course, but the side effect is that these songs aren't necessarily ideal for corporate use. Stephen wrote this album with his own church in mind. Even after the key is lowered slightly, most congregations aren't going to be able to hit these notes, so it's hard to see many of songs mixed into Sunday morning setlists (and to be fair, the same is true for Wickham, save for a few select tracks like "Divine Romance," "You're Beautiful" or "This is Amazing Grace").

As the drum fill and guitar riff starts out "Trust," it sounds like Wildfires is going to be an upbeat Anberlin-esque effort. And "Gloria" joins in with this vibe, and it's the best representation of Stephen as a creator of upbeat worship; it uses the Latin term gloria as a focal point in praising God for his many names. It's when "Wide Eyed Wonder," "Light Rise Up" and "Hope Has a Name" show up that the album tends to drag with predictable and less interesting song structures, and this is the segment of Wildfires that doesn't quite work; "Wide Eyed Wonder" in particular feels even a little reminiscent of the weaker tracks of New Surrender. Later on, "Undone" serves as a call to conform to God's plans and has some of the best songwriting direct from Scripture ("oh let Your mission become mine/unless a seed falls to the ground, it gives no life until it dies.../a house divided cannot stand"). However, it seems to get trapped in over-production, and it could have been served better as an understated ballad or even as a stripped-back acoustic track.

Once the listener gets past the second fourth of the album, "Atmosphere" shows its face, which turns out to be the most accomplished track. It does indeed feel like an "atmospheric" track with its vocal effects and light synth, and the drum pads in the background provide just the needed boosts at the right times. Stephen shares the track with singer/songwriter Sarah Reeves, whose vocals match up well with Stephen's higher register, effectively using echoes and harmonizing to tie the entire song together nicely. Immediately after, "He Is Anthem" includes infectious "woah-oh-oh's," and along with the album-ending "One More Moment" and "All I Need to Know," are some of Stephen's best vocal performances of his career. These are the times when Stephen's unique vocal abilities make Wildfires a project unique to him.

Wildfires is a peculiar case from multiple angles. The fact of the matter is that Stephen Christian has never been associated with the worship genre up until this point, and even those who were aware of his post-Anberlin profession as a worship pastor may not have been prepared for this kind of radio-ready project from him. There undoubtedly will be seasoned fans of Stephen who dismay at Wildfires, yearn for a little more of the grittiness they're used to, and dismiss this project as an anomaly that should never be repeated. And to be fair, often the polish gets in the way of Wildfires being as distinctive as it should be. But after any initial shock wears off, listeners should find a capable worship effort beneath the surface. On its own merits, Wildfires is a promising release from one of this industry's most beloved mainstays.