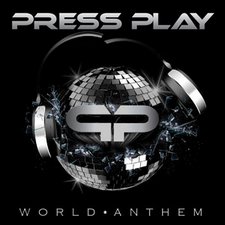 Press Play got off to what I can easily call a rough start with their debut album on Dream Records, Life Is Beautiful. It offered little to nothing in the way of creativity, quality or interest; not to mention, it was incredibly inconsistent as far as the genre. Their sophomore effort, NY2LA took noticeable steps toward fixing their flaws, including keeping the overall genre at least within the same realm. They hadn't reached their full potential yet, but it was at least a better album. Just over a year later (which seems to be the norm for these guys - and girl), they're already primed to release their third Dream album, World Anthem.

The one thing I appreciated about this latest Press Play offering is that the diversity of genres was toned down quite a bit. Instead of the jumbled myriad of sounds that Life Is Beautiful haphazardly threw at the listener, the coherence of sounds that the sophomore album brought into the mix carries on into World Anthem. Almost the whole album is devoted to electronic dance music that is meant to move your body while the lyrics are meant to inspire you and encourage you to be bold about your faith in Jesus. Along with the dance music, there are also some traces of hip hop, with rapped verses in "F-I-R-E" and "Walking On Air." Both times, the rap sections actually work pretty well for their respective tracks. Near the end of the album, the band begins to take on more of a worship sound, starting with "Give It All." Press Play takes the lyrics to a popular worship song, "Nothing But The Blood," and gives it their own spin, keeping some of the lyrics but mostly changing it up.

As in prior albums, Press Play continues with two lead vocalists -- one male (Dave Hanley) and one female (Sada K). They play off of each other well, and it does make the songs a little more interesting than if just one of the two did all the vocals. Hanley's voice still sounds like Skillet's John Cooper, which doesn't work so well for dance music. Sada K's voice, on the other hand, fits in pretty well with the overall sound. World Anthem once again also features vocals from the band's keyboardist in "Angels Sing," which was originally featured on Life Is Beautiful. The arrangement is a bit different, which is good, because it shows that they didn't just lazily take the track from their debut and slap it onto the end of this album. I'm not sure why they decided to include the song again, but it was actually one of the better songs from the debut's track list, so I don't really mind its placement here.

I have to respect this band. While their music isn't the best you could find in pop music, they really seem to focus on improving upon themselves with each new release. Are the lyrics a little cheesy? Yeah. Is there too much autotune still? Definitely. But in comparison with everything they've released through Dream so far, this is the best. It may have something to do with Dream being a part of Universal Republic now, which would most likely open them up to new worlds as far as production goes. But regardless, Press Play keep getting better, and I think I can genuinely say that I am interested to hear where they go from here.