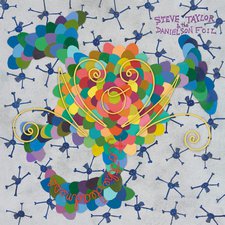 Steve Taylor & The Danielson Foil
Wow To The Deadness EP


At the time of touring their critically acclaimed debut record, Goliath, Steve Taylor and the talented men who make up the Perfect Foil, decided to write a couple of songs with their opening act: Daniel Smith of the indie rock band, Danielson. The only requirement? "If it sounds like something we've already done, we throw it out." The result is the six-song EP curiously titled, Wow to the Deadness.

Beginning with the raucously fun title track, Wow to the Deadness is classic Steve Taylor all the way through -- and Daniel's vocals only add extra character to an already diverse set of songs. Now to clarify, when I say diverse, what I mean is borderline chaotic. "The Dust Patrol," for instance, is a blazing two minutes of raw punk rock that lets up only during its final seconds. It then leads directly into the more fragile "Nonchalant," serving as the EP's sole ballad. The title track is a heavily repetitive acoustic rock jam that surprisingly avoids becoming irritating.

It isn't just the music that impresses, there are a lot of lyrical gems to be found here as well. "Give me joyful liberty transcending up in awe of how you go, oh can I know let us be known by our love," from "Wait Up Downstep" is one such example. And anyone who's attempted to create art can certainly relate to the harsh musings of "The Muse" (pun definitely intended), "It's my party, you're lucky to be here....you're nothing without me, give me my, give me my page and a half."

Taylor's collaborative project with Daniel Smith is just plain fun to listen to. Each and every song catches the ear and gets the listener laughing and pondering, often at the same time. Although it's a little short, this EP will no doubt keep listeners riotously dancing until Taylor pulls out another surprise record from the shadows.

Two of the most quirky artists in Christian music history (Steve Taylor and Danielson [Famile] -- aka Daniel Smith) have teamed for a rather impressive EP. Steve Taylor & the Danielson Foil pick right up where Steve Taylor & the Perfect Foil left off. The songs on this six-track EP are energetic and a blast to hear. Smith's extremely unique vocals may take an adjustment period for those not familiar with Danielson Famile, but it's definitely a worthwhile adjustment. Whether it be the absolute drive of "The Dust Patrol" or the more peculiar "Drats," you can't really go wrong here. This EP will likely end up being more of a niche project, but it's stellar nonetheless. All six songs are great, but if you're only going to give one song a listen, I highly recommend "A Muse." - 2/11/16, Michael Weaver of Jesusfreakhideout.com

One listen to the six-cut Wow to the Deadness EP should be all it takes to convince the average listener that Taylor, Danielson & Co. have, indeed, succeeded at creating something outside of the norm for themselves. The project is offbeat; make no mistake about it. Even so, the most singular aspect of the mini-album is the way in which its half dozen songs don't so much entertain their hearers as assault them in a relentless, rapid-fire barrage; the sum total of which barely manages to make it past the quarter-hour mark.

The frenetic, acoustically-based title track pulls off that rarest of feats in being both wholly unconventional and yet thoroughly accessible. The militaristic chants of "Wait/Step/Wait" lend the mesmerizing "Wait Up Downstep" an almost uncomfortable feel, which, in hindsight, may well have been what the Foil men were shooting for in the first place. Most impressive among the opening trio, though, is "The Dust Patrol," a careening punk rock piece that sounds like The Clash covering R.E.M.'s "It's the End of the World as We Know It (And I Feel Fine)." The song's cloying, over-the-top mid-section (which, it should be noted, was almost surely rendered that way by its creators' specific intent and design) only adds to its infectious, offbeat greatness.

From there, it's an all-too-quick run through the engrossingly spacey "Nonchalant," the nearly unhinged "A Muse" and the nearly uncategorizable closing number, "Drats." The EP drops, seemingly from outer space, and lands squarely in the raw, no-holds-barred rock domain that the superb Goliath album, for all of its many high-points, fell just shy of hitting. And, like Goliath before it, the new outing offers irrefutable proof that Taylor's lyrical genius, some thirty-plus years on from the release of his first record, is arguably stronger and more thought-provoking than ever. Hopping effortlessly between styles as it tosses out one shimmering lyrical nugget after another, Deadness is the work of a set of musicians steadfastly refusing to play to expectations or replicate their past work -- all of which combines to make it such an unqualified masterpiece. - 3/3/16, Bert Gangl of Jesusfreakhideout.com