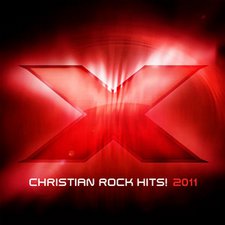 For years now, the best in Christian rock and alternative music have been lending their talents to the X compilations. As of late, the series has grown stale and unimaginative, an unfortunate occurence as the songs making them up are in some cases quite good. It was with this thought in mind that I sat down to review the 2011 addition, appropriately titled X 2011.

At first glance, I was immediately turned off to the idea of the album having any hope of being a change to the negative trend of lackluster albums. But I tried to keep an open mind as I started up the tunes with Hawk Nelson's "Crazy Love." This collection was actually progressing much better than I thought it would, with FM Static's offering proving to be an utterly infectious addition to the album and joining the Hawk Nelson and Sanctus Real tracks neatly into a decent opening set. The disc then hit the musical equivilent of a brick wall with two slow worship songs, one by Emery and the other by Aaron Gillespie. They are not inherently bad songs, but I would've liked to have kept the rock feel going. After all, this is supposed to be a collection of rock hits. Perhaps Emery's "The Curse of Perfect Days" would've fit nicely and a different placement of Gillespie's "We Were Made For You." Regardless, these two lead into a weak patch with The Letter Black contributing another generic rock song and Demon Hunter doing what Demon Hunter always does, a power ballad. The album attempts to redeem itself with other standout tracks from Switchfoot, The Almost, Manafest, and House of Heroes, whose track "God Save the Foolish Kings" proved to be the highlight. Unfortunately, these were hindered by weaker offerings and bad track placement. Speaking of which, the album draws to a close with Underoath's "In Division." True, it is an exceptional song off of what I feel is their best album to date, but it's so misplaced in a collection of largely worship music that it only serves to distract.

Overall, I was a bit surprised that X 2011 wasn't as bad as I thought it would be, but I was not surprised to find myself underwhelmed. As a sampler you would do better by picking up some by T&N or Solid State (plus a couple can be found online to download legally for free). And forget about a cohesive project with X 2011; only every so often does one song flow smoothly into the next.