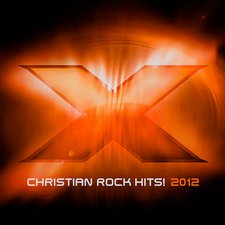 What started in 2003 as a two-disc collection of the best of Christian rock (and some hip hop) has continued steadily as an annual compilation, with one Christmas edition, a few DVDs, and a couple unfortunate "worship" editions--which contained several songs that clearly were not worship songs ("Everything You Ever Wanted" by Hawk Nelson?). It's the X series, and X2012 provides a good dose of the alternative, the heavy, and a little bit of hip hop.

The debut edition of the X series, X2003, kicked off what everyone thought would be a great series, featuring artists like The O.C. Supertones, Watashi Wa, Further Seems Forever, Starflyer 59 and Five Iron Frenzy. X2004 was highly anticipated, but didn't seem to quite deliver the same punch. Relient K, FM Static and Thousand Foot Krutch were among the highlights, but it showed that the series may not have the staying power everyone thought it would. As it continued, it got rather stagnant, with certain artists becoming near-guarantees, even if said artist didn't even have a new album out that year (which also meant you would probably hear songs on the compilation that you've already heard countless times).

X2012 has its positives and its negatives. Positively, it features bands that are either brand new to the series, relatively new, or haven't been featured in years. With the return of Five Iron Frenzy, and their inclusion on X2012, they're being featured for the first time since X2003 (which showcased "Kamikaze"). New to this year's compilation are Lecrae, Icon For Hire, Nine Lashes, Rhett Walker Band, and PRo. It's quite an eclectic mix for an X compilation, so I've got to hand it to them. It would be cool to see some more hip hop artists in the mix in future releases, though to be fair, X was never a hip hop sampler. Then there are bands like Abandon and Sent By Ravens, who haven't seen much inclusion, but are sure to become regularly featured artists. So in this sense, Tooth & Nail (the brains behind X) are taking noticeable steps toward freshening things up, and they are to be applauded for this. Also on a positive note, a good handful of the tracks are excellent. Switchfoot's "Dark Horses" gets things off to a terrific start, with Lecrae's "Children of the Light," Five Iron Frenzy's "It Was A Dark and Stormy Night" and Thousand Foot Krutch's exclusive b-side "Shook" holding the label "song highlights." "Shook" is almost a nod to TFK's stellar Phenomenon, and I have no complaints about that.

Then there are the negatives, which are essentially the same for each X compilation. As I mentioned, some of the bands are almost guaranteed a spot on the tracklist, such as TobyMac, Skillet and Kutless (if you only count the annual X compilations, and not any of the side releases, you'll find Kutless on each one). These bands have found their way into top spots in Christian rock, so it's not too surprising that they're frequently included, but it would also be nice to have them replaced every once in a while with an up-and-coming rock band that may deserve some more attention--especially when some of the artists are featuring songs from three years ago (Skillet's "Awake and Alive" from their not-so-loved album Awake). The same goes for Lecrae's song "Children of the Light," which is from his 2010 album Rehab. They could've used a song from the deluxe edition of Rehab: The Overdose, which featured three brand new songs, since those are the newest tracks he's released. Of course, these aren't Tooth & Nail tracks, so it's understandable that T&N may not have had a choice in what song they got, but I feel like Skillet's and Lecrae's respective record labels could've picked something more recent (doesn't Skillet have a new album coming out this year? What better way to sell a compilation than to exclusively feature a not-yet-released song?).

Other negatives can seem rather minor, depending on how you look at it. But some songs chosen don't really seem completely representative of the album it came from, such as the near-contemporary rock track "Not Alone" from Family Force 5's III, which is a dance rock album. There's also "Dead Flowers" from Demon Hunter's newest release True Defiance; "Dead Flowers" is one of the band's melodic rock songs, but the majority of True Defiance is heavy metal. Of course, these aren't necessarily bad songs, but it's a tad bit misleading. The last critique I have is some of the band/songs choices. I have to admit that Kutless and Hawk Nelson were a bit surprising on this compilation; I personally don't get into these artists, but they included pretty decent material here. However, Manafest's "Fighter" sounds like a Pillar b-side (from somewhere between Fireproof and Where Do We Go From Here), Icon For Hire's "Make A Move" is clearly trying to be Paramore, and Red, Nine Lashes and Sent By Ravens do nothing to keep my interest.

While not the strongest tracklist in X history (X2003 and X2007 are top contenders), X2012 has some highlights for sure. I'd like to see the trend of adding new artists each year, and maybe only featuring the key players when they have a new album to support. Tooth & Nail keeps trying to milk the same cows year after year, and seeing three-year-old songs on a brand new sampler is a little irritating as a music fan. I understand how difficult licensing and contracts with other labels and all that can make things, but to make a good compilation, I think getting fresh material should be a requirement for compilations like this. But overall, X2012 is worth checking out, especially if you're really into singles, or if you haven't yet checked out some of the newer material featured.