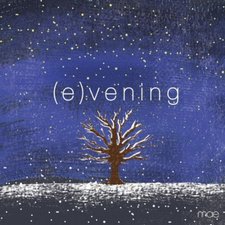 In 2009, Mae released the first of three EPs using their name as an acronym. Though the third installment, (e)vening, has been available at live shows for some time, it has finally seen its retail release via Tooth & Nail Records. For those of you who are not aware, I have bad news: This will be Mae's final release. They recently wrapped up their "Goodbye, Goodnight Tour." If you are a master of the digital age and haven't bought an album in years, you may want to pick this one up at the store. The physical copy comes bundled with a DVD of Mae's final show at the The Norva in their hometown of Norfolk, Virginia.

Let's start with the bad and the reason the album didn't manage to get a higher rating; over half of the disc is instrumental. Of the nine tracks, only four feature Dave Elkins' signature voice which is hugely disappointing. Part of the allure of Mae is Elkins, but it is missing from a vast portion of the EP. This might not be such a factor if it wasn't the band's final record, but given it is probably the last material they will ever release, "disappointing" is really the only word that comes to mind.

Musically, (e)vening is beautiful and quite possibly their best effort. The musicianship, especially the piano, is outstanding throughout. The three-part, piano-only "Seasons" is by far the musical highlight of Mae's career. The entire piece runs a shade over thirteen and a half minutes; during that time you are completely enthralled in the sound of the keys. These three tracks almost make up for the lack of Elkins voice.

The songs with vocals are "Bloom," "I Just Needed You to Know," "My Favorite Dream" and "Sleep Well." While they are all solid tracks, "Bloom" and "Sleep Well" may be the best of the entire EP series. "Bloom" features a message of hope as Elkins sings, "Yeah, we've lost our way and walked around it. Yeah, we've found our faith and then unwound it. Yeah, this midnight air is cold and barren. Yeah, but the bloom of hope it keeps repairing."

Mae has set a pretty high standard for themselves over their 10 year career and (e)vening is no exception. Again, the only shortcoming of the release is the lack of vocals; it is an otherwise stellar release. Any fan of Mae or the indie pop/rock sound they have perfected will want to hear this EP. Though Dave Elkins is missing from over half of the songs and I will miss them dearly, I can say "Goodbye, Goodnight" to Mae with a smile on my face.

Since their debut in (2003), Mae has been a source of fine indie pop rock. After three albums including their special sophomore release, The Everglow, the band decided to close out their career with a series of EPs. Although the first, (m)orning, was a beautiful, artistic collection of songs, the middle installment, (a)fternoon, was a step back. To conclude the trio of EPs, and the band's career, is (e)vening. Although there are no lengthy epics or sparkling ballads, (e)vening's four non-instrumental tracks are good, if not charming. Of the four songs featuring words, "Sleep Well" and the piano driven "Bloom" are the clear highlights. I would have hoped for some more wordier songs to fill (e)vening over the five instrumental tunes, but the pure piano in the three "seasons" section of the EP flow together seamlessly. The pronouns used lyrically throughout the EP are soundly girl/guy centered, but the songs are hopeful in nature. Although it's not as memorable as (m)orning, (e)vening is a step up from (a)fternoon. And although I would have preferred a more monumental finish, I can confidently say to Mae, "Good night and sleep well." - Nathaniel Schexnayder