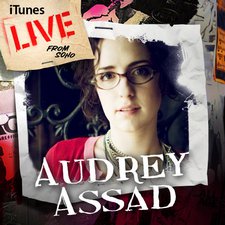 When Audrey Assad's debut The House You're Building released in summer of 2010, the singer/songwriter offered a thoughtful and fresh sound to Christian music. Drawing from 70s and 90s songwriter influences, her piano-based pop, ethereal voice, and vertical, poetic songwriting won well-deserved critical acclaim and landed her album on a number of Best of 2010 lists, while her simple but beautiful live performance joined the likes of Chris Tomlin and Jars of Clay on various tours. Though she's currently working on a new release for 2012, Live from SoHo, an iTunes exclusive, serves as a nice little interim treat for her fans and a pleasant introduction to the spirit of her live show. Recorded at the SoHo Apple Store in New York City, the 8 track live EP includes some selections from her debut, a new song, and covers.

Live albums are typically hit and miss ventures, as are direct digital releases like this. A quick look over various JFH reviews of iTunes albums show that some are wonderful must-haves for fans, some offer very little reason to buy songs again, and occasionally, some have a live quality that is a flat-out disappointment. So how does an EP recorded in an Apple Store fare? Actually, quite well. The intimate quality of the venue is a perfect setting for Assad's personality and style. Her show is typically solo with just a keyboard, but for this concert, she is joined by a number of hand-picked musicians. The players complement and embellish her performance well while letting her voice and melodies shine. As for the audio quality, another element that can break a live album, her voice sounds as pristine and lovely as ever, the music is well-mixed, and the crowd noise is kept to a respectful level that balances nicely with the music.

Of course, most of the selections are from The House You're Building, including the single "For Love of You" and standout tracks like "Breaking Through" and "Come Clean." Between the songs, Audrey shares bits of her story and insights into her songwriting. Particularly compelling is the story behind "Come Clean" and the gratitude as she introduces her band and talks about her new marriage before performing "Ought to Be." As for the songs themselves, the arrangements don't deviate too much from the studio versions, but in spite of a slightly nervous edge to her voice early on, Audrey's singing is controlled and sounds wonderful, even later in the show when she jokes about feeling hoarse from all the high singing.

As for the new material, the album opens with "Sparrow," a new track that reworks a classic hymn in true Audrey Assad style. It's a brave choice to open with a new song, but she sings it with confidence and endearing warmth to set the tone of the show. "Garden" also makes an appearance, a sweetly poetic praise tune co-written with and originally recorded by Matt Maher. But one of the best moments of the record is her cover of Bruce Springsteen's "Hungry Heart," a staple in her recent live shows. As she encourages the audience to sing along, it's fun to hear her play music she loves with such affection. The concert closes on a worshipful note with "Carry Me," which transitions into a powerful chorus of "Restless."

Live from SoHo, like many other iTunes exclusive EPs, doesn't offer a whole lot of new material, but it is still a nice bonus for fans of her music. The music sounds great, and the stage banter and relaxed atmosphere represent her live show well. "Sparrow" and "Hungry Heart" alone make excellent additions to her catalog as well. New listeners should still consider picking up her debut first for full introductions (honestly, there isn't much price difference), but for those who already love her and her live show and want a little something new while waiting for the new album, Live from SoHo should satisfy.