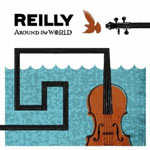 Reilly
Around The World

An independent, Philadelphia-based pop rock band, Reilly has made some strides toward becoming a more recognizable name in the Christian music industry. They've played big festivals (like Creation and Purple Door), played with big bands and appeared on a song with Lecrae and Flame in 2008 (a seemingly weird combination that actually worked pretty well for the song). In June 2010, they released their third album, Around The World. With some pretty talented musicians making up the band, Around The World boasts upbeat pop rock with a Christ-centered message from start to finish. Along with the pop rock sound, there are also hints of electronic elements incorporated, as well as some violins from a couple of the bandmembers who pull double duty (lead guitarist Dan Huie and keyboardist Noele Huie both provide some violin as well as their respective instruments). They give "Wake Us Up" somewhat of a country and/or southern rock feel in the midst of what would just be a standard pop rock song without their presence. This southern sound continues a little into "Crazy," but not due to the violins; rather, due to the beat and guitar. Later in the album, they put on more of a standard worship music sound (though they've added a bit of their own touch to it as well, making it at least a little bit unique). Reilly has the capability to be rather versatile, which is definitely a great quality to have in a band. They also have the talent necessary to make a great album. Unfortunately though, Around The World isn't a great album. It's good, but hard to tell apart from a lot of other bands. Songs like the opener "Too Long Without You" and especially "Remember His Love" are almost carbon copies of most music you'd hear at radio. The lyrics also remain unimaginative. Hopeful, yes; worshipful, absolutely. For this, I cannot fault them. But the Scriptures tell us to sing a new song to the Lord (ironically, "Remember His Love" uses the line "sing a brand new song," but is the quintessential radio song of the album). I admire their hearts, though, and the songs aren't terrible by any means. Rather, they are on par with bands like Seven Places and Tenth Avenue North. These are also good descriptions of their overall sound, so if you're a fan of either of those bands, or their contemporaries, Reilly should probably be on your list of bands to check out. Pick up Around The World, and enjoy yourself. For the rest of us, it'd be okay to skip this one, but don't shut them out completely. There's so much potential and I really see them getting much more popular and possibly making even better music in the near future.