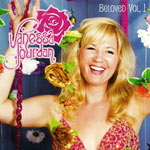 Pop artist Vanessa Jourdan has been playing venues in Southern California since the 2002 release of her independent debut album, Give Me A Stage. A couple albums later, and praise from local publishings about her debut and two following releases, Jourdan and her band have a new EP called Beloved, Vol. 1. The twenty minutes it takes to listen to the EP give a good glimpse at her talent in the singer/songwriter business. Very comparable to artists like Natasha Bedingfield (with the EP even having a bit of Billy Joel influence as well), though there are a couple important things of which Jourdan could use a little more. The first is production. The production value of Beloved is pretty tight, although you can tell it's an independent release. The only thing I'd recommend working on in this aspect is tightening up the vocals a little, such as the "whoa-oh-oh" section in the opener, "Sweet Expectation." The second is finding a little more creativity. It seems that it's a little hard to pull off a vast amount of creativity in the acoustic pop genre, but some artists have proven that it can be done (Tegan & Sara, for example). Jourdan is definitely talented, and Beloved is by no means a bad effort. In fact, I would recommend it to fans of acoustic pop, like Jewel or Poema. However, there just isn't a whole lot about it that really stands out. But if there's a Beloved, Vol. 2 on the horizon, I wouldn't be surprised to enjoy it.