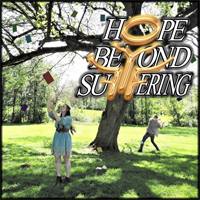 
When you think of husband/wife musical duos, you probably think of such that sound like The Gray Havens, Copperlily, Jenny & Tyler, Wild Harbors, etc. And while those are all great artists, the team of Drew and Vannah Brammell are breaking the mold with their act, Hope Beyond Suffering. The project (and its self-titled album) is a continuation of sorts of Drew's 2018 album, Oh God What Have I Done, which he released under the name Behold the Dawn. Hope Beyond Suffering does feel like a natural progression, with a lot of similar sounds and styles to be found, and an entirely new element in the addition of Vannah's vocals. Though the Brammells self-describe their music as alternative rock, there is actually a lot more to it than that; "metal" is a good descriptor for the overall sound, as they experiment with power metal, metalcore, and even minute glimpses of death metal. There are also bits of nu metal, rapcore, and Celtic rock, and sounds that feel very inspired by bands like Red ("The Dawn Escapes") and Evanescence ("The Unwinding Path"). It's a bit of a hodge podge of sounds, but honestly, a lot of it works really well together (the Celtic sounds in "The Red Lines" being a major exception). While the experimentation works well in the band's favor, the production is really where the album falls flat. Music like this should have beefy production, as it's meant to be played loud. But, unfortunately, the entire album sounds pretty muffled and quiet. The vocal production is also a bit lacking, though the vocal styles tend to work well in their respective settings. Altogether, Hope Beyond Suffering has a lot going for it; with a bigger production budget and a heavier emphasis on the stronger subgenres, the duo has the potential to create some terrific work.
- Review date: 10/20/20, written by Scott Fryberger of Jesusfreakhideout.com