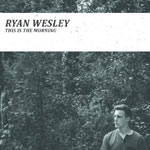 Ryan Wesley
This is the Morning EP

2013 has seen a bevy of new artists, spanning over multiple genres, with some hits, and some misses. One of this year's newest artists is Ryan Wesley, a worship-based artist who seems to be following in the footsteps of artists like Chris Tomlin, Phil Wickham, and The Afters. Wesley recently released his EP, This is the Morning, and all six tracks provide a look into Mr. Wesley's style, and what we can expect from future releases. The EP opens with an intro track, "Chapter One," and sets the stage for what's to come. Ryan Wesley's style seems to be rooted in acoustic-based pop worship, equipped with strings, prominent percussions, sleigh bells, and other audio treats laced throughout the songs. His lyrics cover topics such as human trafficking ("Prayer for the Trafficked"), God's grace ("You Shine Your Light on Me"), and straight-up adoration and worship ("My Only Hope," and "The Dawn,").

Taking a minimalist approach to most of these songs, the lyrics become the main focus, and while he has a genuine quality in his lyrics, they are also a weak point on This is the Morning. Most everything Wesley is saying, has been said before, in almost the same key, lyrics, and arrangement. It is understandable that worship is considered a genre, therefore most artists in that genre sound similar, but hopefully Ryan Wesley will take some time to push his boundaries and experiment a little more on his future projects.