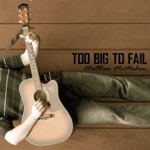 A singer/songwriter from Washington, D.C., Matthew McMahon takes his love for Jesus and his interest in politics and incorporates them into the songs on his latest EP, Too Big To Fail. Strangely, for the part of the country he's from, the EP is a southern rock-flavored offering with a little bit of pop rock and a hint of gospel. It's not so strange, though, if you know that he spent a good half decade in Nashville where he worked on his music skills. The first track, "Too Big To Fail," is a southern rock song through and through, with upbeat drums, organs and lively piano. His voice fits in with the sound pretty well, while simultaneously sounding slightly out of place. The song takes a stab at satire, mocking the government's poor decisions as of late (particularly all the bail out proceedings). It's not the most cleverly-written satire, but it's a noble attempt. The title track is definitely outshined by the following song, "Purified." It's a song longing for God's purification and freedom, having potential to work its way into the Christian radio world and keeping up with some of the other artists there, provided that McMahon can clean up the sound just a little and keep working on his vocals. There are some high notes in "Purified" that he has a bit of trouble hitting. "The Mills of God" follows, contemplating the hardships in life, leading to "Sick of the World," where McMahon lets out his feelings about not just the hardships, but also the sinners that we all are, set to a very slowly-played acoustic guitar. He points out the world's flaws ("We live in a culture that plays us for fools, where madmen go nuclear and kids shoot up schools"), but makes sure to not let himself off the hook ("my members won't do what they should"). My only problem with this song is that the slowness of it almost makes the chorus feel a bit too repetitive. Otherwise, it's a shining moment on Too Big To Fail. Finally, McMahon finishes with a song inspired by a Dave Ramsey quote in which Ramsey says (in reference to newlyweds): "The preacher said, 'And now you are one.' He did not pronounce you a joint venture." It's a love song for McMahon's wife called "Let's Get Ahead of Ourselves," asking her to be one with him and, in a sense, be done with waiting for the future.

McMahon has a pretty good sound, and a lot of potential to be a star on radio. He may a way to go in order to get there, mainly with production and vocal quality, but some more work and another album should put him up there with some of the bigger names in contemporary Christian music.