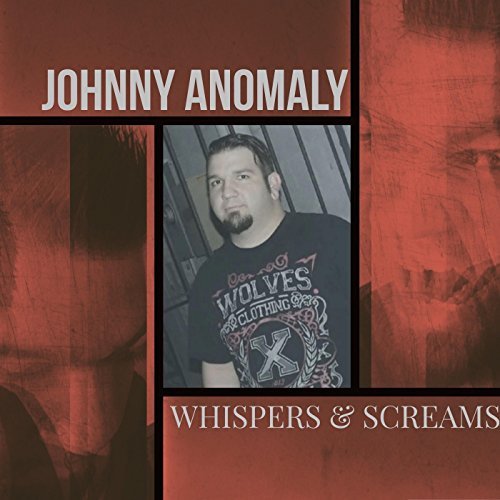 
The art of spoken word is an acquired taste for many, and it's no small feat to be great at it. Many try their hand at it, but few ever really succeed. In 2017, there's a new poet throwing his hat into the ring, and his name is Johnny Anomaly. This year alone, he's released a single entitled "Wings," an EP entitled Nothing To Prove, Nothing To Lose, and his debut, full-length album back in January, entitled Whispers & Screams. Of course, with so few successful artists in the arena, it's difficult to not draw comparisons here. Levi the Poet and Jackie Hill Perry do come to mind when listening to different portions of Johnny's pieces; the subject matter and vulnerability is indicative of a Levi the Poet following, but the cadence and lilt of his voice is like that of Mrs. Perry. However, Johnny Anomaly does set himself apart from these two, not sounding merely like a carbon copy. A lot of his musing sounds a little forced, and it detracts from the words and ideas he's trying to get across to the listener. There are also plenty of times where it's clear that he's getting fired up, but his delivery lacks the intensity needed to truly engage the listener and make it feel real. But this is something that can definitely be improved upon with enough time, and Johnny seems more than capable. The main attraction of Johnny's work would be his sheer openness about his weaknesses, struggles, and even personal devastations. The clearest examples come in a one-two punch of consecutive tracks: "Confessions of a Prodigal Son" and "Whispers & Screams." The former is a tale that all Christians would recognize, not only as an adaptation of the parable of the prodigal son, but also as something we've all been through. The poem starts with the declaration of our own strength ("I'll be my own god and decipher right from wrong...there's no room for You in my life, only one that matters is me"), and turns into a humble confession of our need for Jesus ("I did what I wanted, made enough money to flaunt it, but what I obtained in silver and gold wasn't enough to save my soul"). Then there's the title track, which recalls a dark moment that no parent ever wants to even think about going through: losing a child. "Whispers & Screams" explores the myriad of feelings Johnny and his family went through, from despair to anger to doubt. Ultimately, we see them continue to put their trust in the Lord, but not without the scars. In the end, Johnny Anomaly doesn't do a lot to distinguish himself from other spoken word artists, but really, I would imagine it would take quite a lot to do so, considering the logistics of creating a spoken word album. If you're a fan of spoken word and poetry, or if you need encouragement as you traverse through difficult times in your life, check out Whispers & Screams and see what you think.
- Review date: 12/10/17, written by Scott Fryberger of Jesusfreakhideout.com 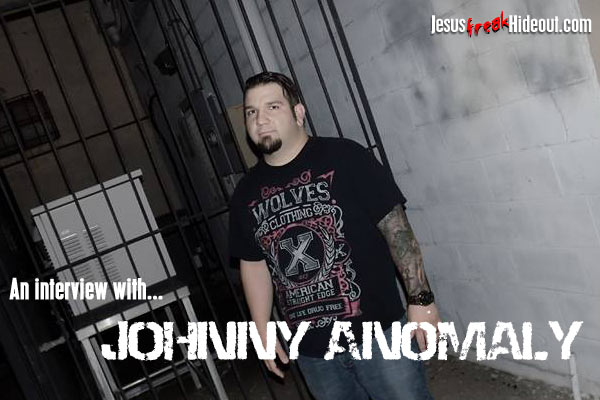 Johnny Anomaly: My real name is John LeBoeuf, Jr. and while I am proud of my name, it just doesn't work for me as a performer. From 2012 to 2016, I performed under the stage name Boy Once Blind until that name ran its course. I didn't want to be recognized by that anymore so I was searching for a new moniker and, after a few days of brainstorming, Johnny Anomaly just stuck. By definition, an anomaly is "something that deviates from what is standard, normal, or expected." I'm a heavy set, tatted-up, bearded, white guy from a small town in Louisiana whose influences stem from hip hop and punk rock. On top of that, I'm a Christian. I am an anomaly and the name is about embracing that identity.

Johnny: More often than not, I write with a heavy heart, and even after a number of revisions, the poems still carry a certain weight to them because of that. Pieces like "Confessions of a Prodigal Son" and "Whispers & Screams" are good examples of that heavier, emotional theme. I try to balance it out with poems like "Broken Chords" and "Bridge to Burn" though, adding a little sense of humor with word play because I enjoy what I do. It's fun, so certain poems reflect that humorous side of me as well. All in all, I'm being true to who I am. My art is a very transparent view of me. I've heard so many people throughout the years explain that I'm saying what they want to say but just don't know how to put it into words the way I do. That really encourages me because, in a way, I feel like I'm speaking up for those who can't or just don't have the courage to yet.

Johnny: Whats interesting is that when I originally started as a spoken word poet, none of my poetry was written to be showcased and that was no different with "Whispers & Screams". It was simply a form of creative coping after losing my son, Kaidon. I started shedding light on some of the darkest corners of my heart, really examining myself and being honest about my struggles. And that wasn't for an audience; that was intended just for me, but I couldn't help but think that this could possibly help other bereaved parents. Like most of my poetry, the title came before the lyrics, and I sat on that idea for a few years before it even came into fruition that this was going to be about my personal experience of what it was like to grieve the loss of my child. The lines, "My prayers begin as whispers then suddenly become screams. With clinched fists at my side, I now know what it means to grieve," were what the lyrics were built around. I knew going into the recording process that it would be difficult to track. I specifically saved that poem for last, and, of course, I broke down on the first take. I knew I couldn't keep reciting that piece, so after the second take, I was done, and that's the take that made it onto the album.

Johnny: Prior to performing spoken word poetry, I was an acoustic singer/songwriter. I did that solo for a few years before recruiting my brother Chase on guitar. We went by the name Big Empty Box, and we still have some old footage posted on YouTube and Reverb Nation. The clip you hear is the chorus from the original song "Parachute" that was recorded by us in February of 2012. The day before life would take a very unexpected turn for me and my family. That song means so much to me and hardly anyone has ever heard it. It was the first song I wrote for my wife and children, so after a few years, I wanted to pick up where I had left off as a poem to my wife. Although I don't play guitar or sing as much as I used to, who knows? I may release some acoustic material of some sorts in the future. All kidding aside, I'd like to try my hand at country music, so there's that possibility.

Johnny: Although I have never toured, it is something I would like to do within the next year. Because I dont tour, I perform as often as possible locally. Whether that be open mics, colleges, showcases, high school classrooms, hosting my own house shows, anywhere I can perform, I take and make every opportunity I can. I highly encourage anyone else out there who is in the same situation to take advantage of their opportunities. It's a great way to creatively "cut your teeth."

Due to not touring, I feel a need to release content on a more frequent basis as opposed to those who may tour strenuously on a record for 18-24 months. Like, just this year, I've released a full-length album, an EP, and I published my first book. I try my best to stay creative. Always writing, recording, and planning my next move. As of now, I already have a few poems that are complete, and I plan on releasing a new single sometime in early 2018.

Johnny: The entire recording process is done in my home studio. I get the tracks mastered by LANDR Audio Mastering, but everything else is done by myself. I have been doing it this way for a while now, and I am still learning as I go. Admittedly, my work could definitely be tracked at a better quality than what it is if it were in a legitimate recording studio done by professionals, but these poems are basically my audio journals. The recordings are as raw as the emotion I have recording them. It's such a great feeling to lock myself away for hours at a time and just pour my heart out, not feeling the pressure of someone watching or criticizing. It's just me, a computer, and a mic. It makes for a great outlet for my creative expression.

Johnny: Thats a great question. While a few people such as Adam Duritz (Counting Crows), Andrew Schwab (Project 86), and Ryan Clark (Demon Hunter) come to mind, I think I would like to spend the day with Chester Bennington (Linkin Park). His death really affected me, and I had never even met him, but in some ways felt that I knew him through his music and lyrics. The guy was extremely talented and passionate about the art he created. I knew early on that I wanted to be a performer, but when I was around 12, Linkin Park released Hybrid Theory, and that album blew my mind. I wanted to start a band as soon as I heard that record. I remember emulating Chesters vocal parts through a karaoke machine microphone, bouncing around, having a blast with my cousins as my audience. To be able to share those slightly embarrassing stories with him, letting him know how much his words meant to me throughout the years, and the impact it left on my life while writing a song together would make for a great day.

Johnny: "Your greatest ministry will most likely come out of your greatest hurt." This is a quote that has stuck with me over the years and is especially true in my case. So no matter what you're going through, remember that God's strength is made perfect in your weakness. I have seen God use my art in ways that still shock and surprise me. I have used my voice in so many negative ways, but God continues to use a wretch like me to minister hope to this broken world. He can and will use you too, but remember that regardless of what platform He gives you, stay humble. Don't waste what He's given you. Be the anomaly. Speak up and stand out!