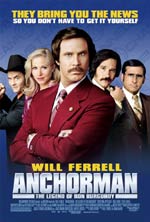 Anchorman: The Legend Of Ron Burgundy 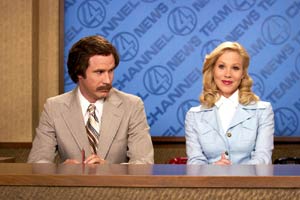 Will Ferrell stars as Ron Burgundy, the top-rated anchorman in San Diego in the '70s. When feminism marches into the newsroom in the form of ambitious newswoman Veronica Corningstone (Applegate), Ron is willing to play along at first-as long as Veronica stays in her place, covering cat fashion shows, cooking, and other "female" interests. But when Veronica refuses to settle for being eye candy and steps behind the news desk, it's more than a battle between two perfectly coiffed anchor-persons...it's war. (from MovieWeb.com)

Will Ferrell is best known for his frequent comedic genius when starring as a regular cast member of Saturday Night Live until a couple years ago. Last year he proved his worth on the big screen by leading the surprise hit Elf around Christmas time. Due to Elf's success, DreamWorks immediately began marketing Anchorman, Ferrell's follow-up comedy. But while Anchorman looked to be a potentially silly family summer film, the end result was a film that almost earned itself an R rating.

A month or two before release, Anchorman: The Legend Of Ron Burgundy was re-edited from an R rating down to a more viewer-friendly PG-13 rating. Sadly, whenever a film undergoes this transformation (i.e. 50 First Dates, Anger Management, etc), the final cut of the film is usually considerably more adult-oriented than most PG-13 films are intended to be. And while I watched Anchorman, without knowing what really to expect beforehand, I was more than disappointed by the content that permeated what could have been another great, silly comedy.

I left the showing of Anchorman with a love/hate feeling towards it. The comedic approach that Ferrell and company took was often hilarious. They mixed downright silly and random humor with perfect timing and delivery. But when one really funny moment popped up, there seemed to be at least two disgustingly crude jokes that would follow. While profanity wasn't too frequent (with a lot of cute non-profane substitutes used instead), there still managed to be 1 significant "f" word as well as many lewd comments. The news team behind Ferrell's Burgundy were three interesting characters, two of which, sadly, were pretty much womanizers. That alone dampened my feelings toward the movie. But when Ferrell wasn't hamming it up on screen, it was easily Steve Carell who stole every moment he had on screen as his character Brick, often delivering silly, random lines that helped counteract the junk from the other guys. 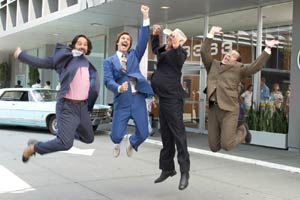 There's very little -- if anything -- to take seriously about Anchorman. I enjoyed a lot of the random humor (especially a back-alley brawl, and a meeting where the news team tries to stop Veronica Corningstone from being hired), but the bedroom humor was just too much and, quite frankly, highly unnecessary. From several blatant and inescapable shots of an erection joke to even a sexual encounter between Ron and Veronica (after heavy kissing, we see a psychedelic cartoon called "Pleasure Town" after she asks Ron to take her there. We then see them riding clouds, etc - all played for laughs). The humor is often juvenile but the jokes too risque. The film just isn't sure who to target their jokes for and while we're expected to truly like these characters, I just don't see how redeemable they really are.

One other complaint is the editing for the film. Numerous scenes and lines from advertisements and early footage for the film are completely omitted from the movie. A ridiculously funny exchange between Ron and his dog Baxter from early footage has been changed considerably here -- to the point that it's just not nearly as funny as it was originally presented. Other scenes omitted include lines repeated many times in ads. One curious scene from a trailer that is never addressed or even hinted at involved Burgundy taking a bullet for Veronica or walking face-first into a filing cabinet. There is no place those scenes would even fit into this story so it makes me wonder how they even wandered from the cutting room floor into the ads in the first place. Other shots missing that were in the trailers include a bandaged-up Burgundy emerging from a TV van with Veronica, Ron interacting with people on the street, admiring his own billboard, collapsing the conference table while tackling Veronica, and several others.

But Anchorman is nearly a waste because, while some jokes are roll-on-the-floor funny (with key scenes featuring surprise cameos being priceless), it's just too vulgar overall. Seeing it edited will cut out a considerable amount, but you'll see some of the best parts without having to wade through the trash to get to the funniest moments. And to anyone who may feel this review takes more of a prude stance on the film, I just have to unapologetically say that I couldn't possibly, with a clear conscience, recommend a Christian -- pursuing a life of purity -- see this movie. It's a shame because it could have been a really fun movie.

In conclusion, Anchorman indeed had its moments, but vulgarity and crude humor muddied up what could have been one big silly and fun film. This movie is one news brief to overlook this summer. If you want a good clean laugh, Shrek 2 is still your best bet. Anchorman is a letdown.

Sex/Nudity: Very heavy... There is an abundance of suggestive and blunt sexual comments and advances. Here are just a few examples: We see Ron in a small bathing suit at a party and women in small bikinis. Champ makes lewd suggestive noises and motions about wanting to have sex with Veronica. Champ gropes Veronica's chest, pretending to be an accident (before asking her out); She then punches him in the groin. Brick repeats a crude pickup line to Veronica about her joining a party in his pants (but being dimwitted he doesn't understand what he's saying and fumbles with the question). After Ron hits on Veronica, she uncomfortably points out a noticeable erection in his pants. We then see several shots of an exaggerated bulge in his pants that he tries to excuse as an illusion. There is a sexual encounter between Ron and Veronica that begins with heavy kissing that follows with a bizarre, psychedelic cartoon called "Pleasure Town" after she asks Ron to take her there. We then see them riding clouds, unicorns, etc, insinuating their sexual experience (all played for laughs). We don't see any actual sexual acts, but see then lying in bed afterwards with her smoking a cigarette in a nightgown and him shirtless. The news team sings "Afternoon Delight" which is a theme about love but is also a double meaning. Veronica makes a comment about her being good at several things including "screwing" that leads to a joke about that. Champ and Brian try to distract Veronica while she is reporting and they make sexual motions and we then see Brian in his briefs with Champ pointing at them (we see later extended moments from this scene in the outtakes too). Ron tries to embarrass Veronica by introducing her as "T*ts McGee". Many other comments and references are made during the course of the film...

Alcohol/Drugs: Ron says he loves scotch and we see him drinking several times, even on the job. Ron appears to be drunk at a bar. Many people drink during the film.

Blood/Gore: A biker has some bloody scrapes on his head; Ron has a scrape on his face; A man's arm is cut off and we see the drastically fake bloody stump but remains somewhat gory-looking.

Violence: Comic violence. A biker accidentally wipes out on a freeway, an animal is thrown off a bridge; Veronica beats Ron with a TV antennae and throws a printer at him; A man's arm is cut off; A man's arm is ripped off by a bear; We see a back alley brawl with many different weapons and one person is killed by a trident (but all violence is played for laughs) Disclaimer: All reviews are based solely on the opinions of the reviewer. Most reviews are rated on how the reviewer enjoyed the film overall, not exclusively on content. However, if the content really affects the reviewer's opinion and experience of the film, it will definitely affect the reviewer's overall rating.