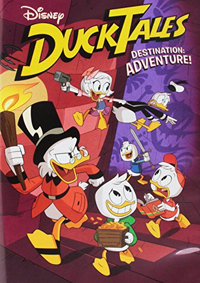 An ancient tomb in Toth-Ra, the mountain peak of Mt. Neverrest, a vacation island for Greek godsglobal expeditions await! Thanks to Huey, Dewey, Louie and Webby, trillionaire Scrooge McDuck is back in action, leading the way to death-defying exploits stretching all the way from Duckburg to legendary destinations around the world. Let the greatest family adventures begin! (from Disney) 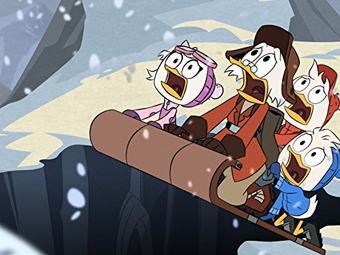 Nothing new is under the sun, and Hollywood continues to exemplify this by remaking beloved shows and movies over and over. I tend to lean on the side of feeling that if an update, sequel or reboot does not improve upon or add to the original in a good way, it's not worth making. One of the recent franchises to be given new life 30 years since it debuted was Disney's animated series DuckTales, which originally had been based on popular Uncle Scrooge comics by Carl Barks. I was pretty young when DuckTales debuted on TV, and I was instantly smitten with the show. It most certainly captured the essence of 80s pop culture at the time, but it also frequently presented epic adventure stories with sweeping music (when it wasn't channeling 80s pop trends) and gorgeous, hand-drawn artwork. There had never been a cartoon series quite like it, and there hasn't been one like it since.

The 2017 reboot of the series set out to take cues from the original comic artwork styling, but also present itself in a much more modern way. Where the original series was often influenced by "modern times" of the 80s (more so in the later episodes while the earlier ones felt a bit more timeless), this new take leans heavily on today's culture to drive the stories. As such, instead of nephews Huey, Dewey and Louie being somewhat of one accord, each one is given their own individual personality and style of dress here. Also, the sweet and adorable Webby is far more sassy and independent. "Obnoxious" is easily the best way I could describe the new versions of these characters. 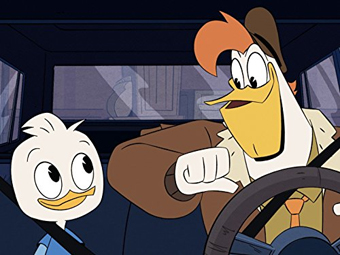 As someone who quite literally grew up on the original DuckTales series and characters, seeing them fully reimagined is a hard pill to swallow. My son is the same age now that I was when the first series debuted and even he was taken back by the new approach to the series (and had some mixed feelings about it. I did share the original series with him while he was pretty little). Aside from major personality shifts in the characters, the tone is completely different. Everything is faster, zanier and more frantic. The episodes play out as if everyone is sped up -- including their voices. It's even more evident and jarring when you watch one of the classic episodes right after seeing one of these new ones (but more on that in a bit).

This DVD collection offers 6 episodes from 20+ episodes of this new series and 2 classic episodes from the original series (with it being the first time these two particular classics have been released to DVD). The new episodes in this set include "The Beagle Birthday Massacre!," "The Living Mummies of Toth-Ra!," "The Impossible Summit of Mt. Neverrest!," "The Spear of Selene!," "Beware the B.U.D.D.Y. System!," and "The Missing Links of Moorshire!" which seem like random selections from the series' first season. "The Beagle Birthday Massacre!" gets things off to a bumpy start where Webby meets a new friend and they have a run-in with a slew of Beagles, and then "The Living Mummies of Toth-Ra!" features the main DuckTales crew inspiring a group of oppressed people to rise up against their evil leaders over their newfound love of burritos (?!). Most of these stories are frenetic yet forgettable, with the exception of "Beware the B.U.D.D.Y. System!" which seems to simultaneously remake a classic episode titled "Armstrong" and (re)introduce both Gizmo Duck and Darkwing Duck, while turning everything on their heads. The Darkwing Duck cameo almost makes the DVD release worth it, but it's not only just about a minute's worth of animation time, but it reestablishes Darkwing as a television character played by an actor instead of an actual character in the DuckTales universe. (Let's not forget that the original Darkwing Duck television show from the 90s took place in a neighboring city within the DuckTales universe where Launchpad served as Darkwing's sidekick.) Jim Cummings reprises his role as Darkwing while we also get appearances from the series' best villains. But it's such a tease of potential greatness--and then turned into a TV series within the TV series?! It's just one of the many things that make this new show fall short of being worthy of its Disney Afternoon predecessors. 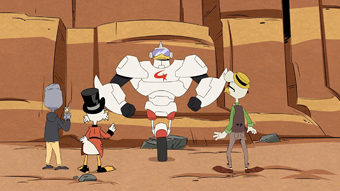 The 2 bonus episodes, "Ducky Mountain High" and "New Gizmo-Kids on the Block" aren't exactly the cream of the crop of the original series; there's good reason why they haven't been released on DVD yet. While I'd still take either of these episodes over this newer material, these episodes were among the final episodes to ever air of the original series back in 1990. If fans of the new series were to get an honest taste of what the original series was like, these aren't very good options to showcase that series. (Revisiting something from the first season would definitely show off the series better. The five-part pilot, "Treasure of the Golden Suns" is still some of the best the series has to offer - in either incarnation.)

That said, the characters in the original series were often mischievous, but they seemed to usually learn a lesson. Here, they're simply obnoxious and bear traits you wouldn't want your kids to emulate. The adventure scope of the classics felt bigger too, especially with the animation style back then. Here, there's a cheapness to everything present -- from the often nondescript voices to the boxy character design. The classic series arguably boasted standout voice performances that really gave life and personality to these characters. In the update, they're just so vanilla, if not entirely irritating. Even though the nephews all have their own individual voices now (while the classic renditions shared the same voice), they're still similar - and they just sound like normal young guys instead of having charming, warm, "ducky" voices. The high pitch - and speed - of the delivery is more in line with the modern style of cartoons, but it's so hyperactive that it's far more grating than amusing. And characters like Gyro Gearloose, Fenton Crackshell, Launchpad and even Ma Beagle have such generic voices that it is likely to make anyone familiar with true voice talents of yesteryear to pine for the days when those talents frequented animation.

I admit that chances are my feelings toward the new take on DuckTales is more of a personal preference than a reflection on the production itself--although I'm genuinely shocked by its high rating on IMDb. Fans of the original will likely be split on how they receive this Disney XD reboot, but for this fan of the original series, I find 2017's DuckTales to be a colossal collection of missteps and bad decisions -- from conception to execution. If you can get your hands on the original series, pick up the first couple volumes on DVD (or check it out on iTunes or Amazon) and enjoy quality animation, voice performances, and storytelling -- and be sure to pass on this poor attempt at a reboot.

- John DiBiase (reviewed: 6/5/18) Disclaimer: All reviews are based solely on the opinions of the reviewer. Most reviews are rated on how the reviewer enjoyed the film overall, not exclusively on content. However, if the content really affects the reviewer's opinion and experience of the film, it will definitely affect the reviewer's overall rating.