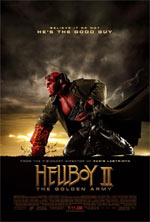 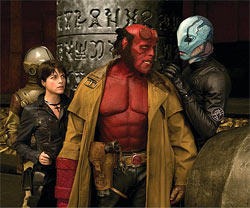 After an ancient truce existing between humankind and the invisible realm of the fantastic is broken, a ruthless leader who treads the world above and the one below defies his bloodline and awakens an unstoppable army of creatures. Now, it's up to the planet's toughest, roughest superhero to battle the merciless dictator and his marauders. He may be red. He may be horned. He may be misunderstood. But when you need the job done right, it's time to call in Hellboy (Ron Perlman).

Along with his expanding team in the Bureau for Paranormal Research and Development--pyrokinetic girlfriend Liz (Selma Blair), aquatic empath Abe (Doug Jones) and protoplasmic mystic Johann--the BPRD will travel between the surface strata and the unseen magical one, where creatures of fantasy become corporeal. And Hellboy, a creature of two worlds who's accepted by neither, must choose between the life he knows and an unknown destiny that beckons him.

Four years ago, director Guillermo del Toro brought to life a unique comic book hero named Hellboy in the film by the same name. This was a film I ultimately skipped and waited to see on video, only to find that it had its moments but just wasn't my kind of film. Del Toro made no bones about stuffing plenty of violence into 122 minutes, with the worst of it being caused by or involving a character named Kroenen who was the henchman of the evil Rasputin and the "victim" of self-mutilation (which we see in all its disturbing glory more than once, albeit briefly). Still, there was something about Ron Perlman's demon-child-turned-rosary-carrying wisecracking hero that was charming and fun to watch. With the release of del Toro's second Hellboy adventure, Hellboy II: The Golden Army, we're reintroduced to "Red" and his pals as they are enlisted to save mankind once again... sans the likes of Kroenen and Rasputin, thankfully. 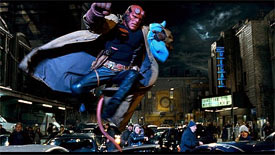 Del Toro loaded Hellboy with all kinds of Christian imagery (and, at the same time, "balanced" it out with unnecessary blasphemy), enough to start a few discussions. Hellboy II is a lot less forward with any kind of Christian themes, but you'll find quite of bit of imagery thrown in throughout the film - from large glowing cross-shaped signs on a building in the background of a key fight scene, to uses of "777," and characters wearing crosses during the film. However, any kind of Christian references or similarities end there. As a sequel, Hellboy II: The Golden Army feels partly a natural continuation of the first film and partly a forced, fabricated sequel. When the film begins with a poorly executed flashback to when Hellboy was a child to set up the film's plot (little Hellboy looks about as good and convincing as the little Grinch did in Ron Howard's live action rendition), it's easy to get the sinking feeling you're in for a terrible sequel. However, once Hellboy II gets through its setup and past a few heavy-handed attempts to feel "bigger and better" (please, the troll market sequence wasn't necessary), the film hits its stride and finds its footing. When del Toro gets his desire to up the ante out of the way and focuses on the characters and story at hand, he succeeds in delivering some great comedy and some impressively choreographed action sequences. At times it feels like del Toro may be trying too hard to fit too many story ideas into one film - from subplot love stories to life-and-death rescue attempts to Red's desire to be discovered and accepted by the human race. While none of the side trails are left unresolved, it ultimately just feels a bit scrambled in thought and execution - like a bunch of different ideas had been brought to the table and then were all forced into one single script. The result isn't as bad as I'm making it out to sound, but there's still that feeling like del Toro tried to do too much at once this time around.

But The Golden Army certainly has its moments. The scene where the FBI team investigates a decimated auction only to discover an immense amount of nasty little creatures called tooth fairies is altogether creepy and entertaining. From there, del Toro spends more time trying to show off effects and new creature designs than frighten his audience (which is fine by me), and proceeds to deliver several fun and exciting action sequences - from Red breaking out his gun, "Big Baby," to the film's final showdown. Also, the humor is as very much a part of the film this time around as it was the first time, with the standout scene being when Red and Blue share some lovesick sentiment over a six pack. Even if del Toro options for a cheap laugh or two, they're executed nicely and serve as film highlights. 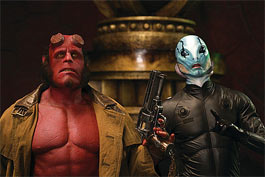 While Hellboy II: The Golden Army overall feels more toned down than its predecessor (which is an impression you won't get from the first quarter of the film), this sequel is still very much an intensely violent and rough sci-fi action/adventure flick. There are plenty of creatures that are the kinds of things nightmares are made of, so I wouldn't take the kids to this. Also, language isn't atrocious, but there's a few uses of blasphemy, as well a handful of "d*mn," "cr*p," and "a**." There's also a play on the "f" word where a character speaking with a german accent says the word "focused" but pronounces it in a way that sounds like a profanity, and Red repeats it recommending that he doesn't say it that way.

Overall, Hellboy II is a bit of an improvement over the first movie, mainly in the graphic violence department, but may not be as finely executed. Still, Hellboy II: The Golden Army is an action-packed superhero story that mixes elements reminiscent of Men In Black (for better or worse, but it just barely escapes the kinds of missteps that the MIB sequel took to ruin what should have been a great follow-up) or Star Wars to present viewers with an otherworldly alternate reality where an unlikely hero like Hellboy is keeping us safe from all kinds of fantastical evil. The Golden Army is good enough to warrant a third outing, but if that should come to pass, let's hope del Toro doesn't go the Shrek The Third route to let it all completely unravel in the end. If you have any questions or comments about the film before you see it (if you decide to), feel free to contact me.

Sex/Nudity: We learn that Liz is pregnant. We even see her with a pregnancy test with it pink on one side and a white plus sign appearing on it (during this, she's in the bathroom wearing a tank top and black panties, but nothing revealing is shown. We see her in that outfit again later on); We see Hellboy in the shower but steam blocks any nudity below the waist

Alcohol/Drugs: We see Red and Abe get drunk off of beer (we see Hellboy drinking beer a few times during the movie -- and his locker is filled with beer cans) and we see them stumbling around, slurring their words, and acting drunk.

Blood/Gore: During a fight, we see Prince Nuada slicing and beheading men or creatures with large helmets, therefore we see the huge helmets falling to the ground on a couple occasions, but it's nothing bloody or gory - but it's obvious he's decapitating them; We also see Nuada lunge at a human with his sword, presumably beheading him, but we only hear the sound as the scene cuts; When we see little tiny creatures called tooth fairies flying around and gnawing on anyone around them (Abe pulls one off his arm and we see what looks like a blue fleshy wound on his arm), and Abe tells Red that all they do is eat and poop and we find that the goop on the ground under their feet is excrement; As the tooth fairies attack, we see one under a human agent's clothes as he's being bitten (it's quick and it's not definite we see blood). During the attack, we see many tooth fairies squish into goo and we see two human agents overtaken by them. During one attack, they pull at his eye lid and mouth (not gory) while we see the other man is reduced to skeletal remains on the ground; Prince Nuada and Princess Nuala both have bloody noses after a fight; Hellboy has a bloody nose after a fight; Hellboy has a tiny bloody cut on his cheek after being hit with some unseen object; Prince Nuada holds a knife to Princess Nuala's face and slightly cuts her cheek. Both his and her cheeks then show a little blood; Hellboy has a bloody cut on his chest with a blade sticking out of it. We then see a blood soaked bandage around that area; We see some blood on Nuala's arm through her sleeve; A person stabs themselves and we see some blood on their clothing; Hellboy has some blood around his mouth after/during a fight

Violence: Lots of action violence. We hear that the tooth fairies eat people (we learn about 70 or so) starting with their teeth first. We see them attacking people and being blown into goo by gun shots, etc; Nuada slices up a large number of soldiers and stabs the king; Some comedic violence is included, but other violence involves Hellboy fighting a large troll-like beast, a gigantic plant-like monster, huge robots, and a couple one-on-one battles with Prince Nuada, as well as other action violence Disclaimer: All reviews are based solely on the opinions of the reviewer. Most reviews are rated on how the reviewer enjoyed the film overall, not exclusively on content. However, if the content really affects the reviewer's opinion and experience of the film, it will definitely affect the reviewer's overall rating.