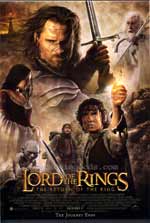 The Lord of the Rings: The Return Of The King 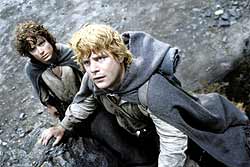 Sauron's forces have laid siege to Minas Tirith, the capital of Gondor, in their efforts to eliminate the race of men. The once-great kingdom, watched over by a fading steward, has never been in more desperate need of its king. But can Aragorn (Viggo Mortensen) answer the call of his heritage and become what he was...

Finally!! I vividly remember sitting in the theater as The Fellowship Of the Ring drew to a close with Frodo and Sam peering out at Mordor and me being livid that the film was ending on such an unresolved note. Well kids, the third and final installment in The Lord Of The Rings trilogy has been released. The Return Of The King is a longer, funnier, bloodier, and more intense film than either of its predecessors. The Fellowship suffered from being the story's intro, the background. Two Towers suffered from being the middleman - no resolution, no beginning. Return Of The King is almost all climax. ...King is almost all action. We know the story. We know the characters. But Jackson doesn't stop developing them regardless. He takes them further (with the help of Tolkien, no doubt), crafting an end result intense enough for you to pitch a tent at the edge of your seat. And as any good story has a beginning, middle, and end, each film represents these pieces. These just aren't sequels that stand on their own. It's one big long epic... and for those like me who haven't read a single line from the original Tolkien texts, it's been a long wait for the story's resolution.

Upon seeing all the films and now having the complete theatrical interpretation to chew on, it's clear to me The Lord Of The Rings is a downright incredible story. Tolkien is nothing short of a genius. However, director Peter Jackson took the liberty to alter some key plot points to create his own spin on the classic novels. But these productions are huge films. From the music to the sets to the special effects and the massive armies, these films tower on the big screen. They're instant classic epics that will withstand the test of time as the novels have. The spiritual issues behind the films will be something disputed amongst Christians for as long as we have on this Earth, but considering the context they were originally penned in (Tolkien was a Christian who apparently wrote these books as entertainment and encouragement for his son while away at war), it helps with separating the entertainment value of the films from reality. The good vs. evil value and the friendship bonds, loyalty, and unity themes are all redeemable. It's wonderful to see films with messages that aren't so political that you feel like a "D" or an "R" should be imprinted at the bottom of the screen at all times. 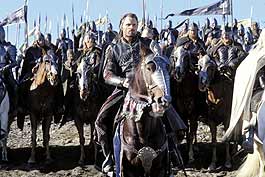 The resolutions of Return Of The King are quite satisfying. It has been reported that the film has approximately 12 endings. About half of those are highlighted with the screen fading to black, causing the audience to anticipate a "The End", only for the screen to light up with a continuation of the story. Considering how much we've been put through as viewers, the finality of the trilogy is graciously thorough. While some will find it redundant and drawn out, fans of the books and/or the films should be pleased. As the story wrapped up, it was hard to see the characters go. With the length and detail given to Fellowship and Two Towers, with each character's development and involvement, it's easy to become attached to them. You feel Frodo's struggle, you sympathize with Sam's responsibility and appreciate his valor and loyalty. You cheer on Legolas, Gimli, and Aragorn's fights straight on to victory, and you can only dream of Gollum getting his just desserts. It's obvious Jackson loves these characters as much as Tolkien did, and saying each actor does a fine job in their parts ultimately wouldn't do them justice.

In the content department, we've got plenty of caution signs for you. If you thought Two Towers was really violent, ...King takes the cake. The battles are much more involved this time around and the action more fierce. We get countless more views of the grotesque and downright hideous faces of the Orcs and Uruk-hai's this time around as well. The extent of the graphic violence peaks when we see brief glimpses of severed human heads being catapulted from the Uruk-hai to the soldiers of Gondor, or when we see a character's finger bitten off and a close-up of the bloody results. The film is a dark affair, but hope permeates the gloom that overshadows the story. Excessive violence and the creepy nature of certain plot elements are the only main drawbacks to the film. Language and sex are absent which is a refreshing change for Hollywood.

And as with the two previous films, we suggest leaving the kids home for this one. From the graphic violence to the scary images, to the intense sequence involving Shelob the giant spider chasing Frodo, this is not a film for the whole family. Use discretion and caution when deciding who should view this film.

Overall, I was completely impressed with the third and final piece of the Rings puzzle. It's sad to see the series end, but a relief to finally be given a conclusion. One of the biggest, loudest, and most intense films to ever flash across the silver screen, The Lord of the Rings: The Return Of The King is a breathtaking piece of cinematic art to behold. Let's hope the Oscar's get Best Picture right this year. If you plan of seeing the film, please take caution. Violence and disturbing or just downright gross or creepy images are in abundance here. But celebrate LOTR fans! The end is here.
- John DiBiase (reviewed: 12/18/03)

Blood/Gore: We see a close-up of Smeagol's rotten teeth as they bite into a live fish (with gross results). We also see his disfigured and grotesque appearance as he transforms into Gollum. A lot of the battles include some bloody casualties, Uruk-hai dismemberments, etc. Denethor has blood on his mouth as he is eating, we even see it squirt out at one point. Aragorn, Gimli, and Legolas are surrounded by a mass of ghostly beings who look somewhat decomposed and somewhat skeletal. We see some grotesquely gory severed human heads catapulted from the Orcs to their enemy. We see them airborn and brief more-detailed close-ups that are quite gruesome. Gollum leads Frodo to a dark and creepy cave where we see the remains of Orcs who had previously ventured into the cave (i.e. the home of Shelob). Eowyn decapitates a flying creature and we see the severed head and the bloody stump. A dying man has a little bit of blood on the side of his mouth. We see a battlefield littered with dead bodies (as we also see them littering the castles and cities throughout the film too). Merry has a little bit of blood on his face following a battle (with a somewhat bloody dead body lying near him). A man sets himself on fire (but we don't see any gory details. We see several nasty scars on Frodo's chest from previous wounds. A character's finger is bitten off and we see briefly see the severed digit as well as several views of the bloody stump on their hand.

Violence: Extreme, heavy war sequences. Very intense sequences of combat with people/creatures being sliced, stabbed, crushed, dismembered, etc. Disclaimer: All reviews are based solely on the opinions of the reviewer. Most reviews are rated on how the reviewer enjoyed the film overall, not exclusively on content. However, if the content really affects the reviewer's opinion and experience of the film, it will definitely affect the reviewer's overall rating.