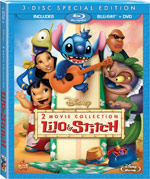 Far off in the galaxy an alien scientist has created the ultimate weapon, Experiment Six Two Six. When this experiment escapes their clutches and lands in Hawaii on the planet Earth, a young native girl named Lilo finds the creature hiding out in a dog kennel and she names it Stitch. Lilo's sister who takes care of her buys Stitch for her in a last attempt to improve their home life while having a social worker is breathing down her neck about her ability to care for her little sibling. What follows is Lilo and Stitch's lessons in family and an intergalactic chase as Stitch's home planet tries to recover their experiment gone wrong.

Disney returned to its raw animation roots with 2002's Lilo and Stitch. After many films being spruced up with CGI graphics mixed in with traditional hand-drawn artwork, Disney has returned to a more simplistic art form, and it shows. In fact, it's rather refreshing. While Lilo and Stich is an downright odd film for a Disney venture, it still seems to work in the end. One of the problems it does have, though, is it doesn't go as far as it probably could.

Disney's animated features are known for being big and over-the-top. Something about Lilo and Stitch just felt like a big Saturday morning cartoon and not much more. It was a little too short and seemed to focus a little too much on the turmoil within Lilo's family and not enough on Stitch and the interaction between the two main characters. A lot of their key interactive moments were limited to a montage of scenes. At another point in the film, they do include another montage of scenes with the two of them that sparks some of the best laughs. It just seemed like a tease for what could have been a series of really great scenes. The momentum generated once the story gets set up is a little too fast, while a lot of the Nani and Lilo conflicts seemed to put a damper on the mood.

Another problem the film had was its supporting characters. Although they were decent and sufficient, they weren't exactly Kronk and Yzma from The Emperor's New Groove, Timon and Pumbaa from The Lion King, or the Genie from Aladdin. Lilo and Stich had a lot more potential to be better than it was, but it never really seemed to get to where it had potential to go. This may be because of an end sequence that had to be reworked after September 11th. Apparently, the film's final chase scene involved Stitch stealing a 747 from the Honolulu airport, flying it through the city itself, dodging things including skyscrapers, buildings, etc. Some of this was kept by replacing the 747 with a space ship, but there were still big enough changes made (and film history has shown that other films, like Men In Black II also didn't benefit from changing the finale due to September 11's disaster). With that aside, the film still managed to be pretty enjoyable despite its flaws and has enough heart to carry it along. (As a side note, for those who hate tarantulas or spiders, there's a scene where Stitch sees some TV sets in a window and a live action clip of a real tarantula horror movie is being shown on the screens.)

Revisiting the film in 2013--after not having watched it again after its 2002 release (in which the above paragraphs were initially written and later edited), I did like the film better than I first had. However, I still felt the child services theme--in which Lilo is being looked after by her big sister because their parents had died, and now child services threaten to take Lilo away from her--is still pretty heavy for a kids movie. There are some shouting matches between the sisters, and some thematic tension generated by the possibility of Nani losing custody of Lilo. It's an oddly realistic theme for a Disney film involving a lab-grown alien that comes to Hawaii and poses as a family dog to have feature. The movie seems to struggle to find the right tone, and the thematic weightiness of the story robs some of the fun the story is really trying to capture.

The content has a lot of slapstick violence and Stitch attacking, destroying things. So the main thing to keep in mind is just the action element here. Otherwise, just some name-calling is present. Again, the theme of the kids having lost their parents and Stitch feeling like an ugly duckling without a family is a pretty heavy one. It all sets up a touching theme of family and sticking together, but the road to that theme is an emotional one.

In closing, Lilo and Stitch is a good movie for the family, but it doesn't quite go as far as it could with developing the relationship between Lilo and Stitch that would have otherwise strengthened the film.


For 2013, Lilo & Stitch makes its Blu-Ray debut. Like the also-new The Emperor's New Groove Blu-Ray releasing the same day, Lilo & Stitch is vibrant, colorful, and absolutely crisp in picture. Unfortunately, also like the New Groove set, there isn't a single bonus feature to be found on this 3-disc (1 Blu-Ray with both movies and 2 separate DVDs for each movie) set. It's a crime, too, because I was actually looking forward to watching some behind-the-scenes featurettes on the film. 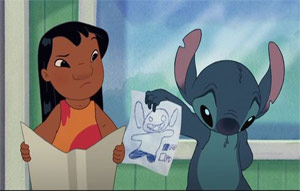 Lilo & Stitch 2: Stitch Has A Glitch (1:08:03) is the only extra feature here. It's the straight-to-DVD 2005 sequel that takes place shortly after the events of the first film. It's better than most of Disney's straight-to-DVD sequels, but it's also kind of forgettable. In this story, however, it's great to have Lilo & Stitch as friends throughout the whole film (which is the nice thing about such sequels), with their meeting already having been established. We now get to see what life is like for Lilo and her sister with aliens living among them. But in this story, Stitch starts experiencing some genetic malfunctioning that is due to not having been "fully charged" in the lab when he was created. It presents a nice opportunity to see a flashback of his creation, but it also is a catalyst for there being new tensions between Lilo and Stitch. Also, and not to spoil anything, but this is indeed a spoiler that parents should know about, in the film's climax, Stitch actually dies for a brief period of time. It's pretty emotionally heavy and some children may have a hard time with it. But thankfully, the story doesn't stay there and it ends on a much happier note with Stitch being brought back. Overall, with the animation being pretty good and not too much different than the first film, and with the story not being a total waste, the sequel is at least watchable. (3 stars out of 5)

If you're a fan of Lilo & Stitch and don't care about bonus features, this is the perfect set for you. But if you'd like more than just the two movies, you're out of luck. It's definitely the best picture presentation of either movie ever released, but the omission of bonus content is a big disappointment.

Sex/Nudity: There were some characters in either mid-drifts or bathing suits or shorts exposing thighs, but nothing more. They live in Hawaii, so we see related attire.

Blood/Gore: Stitch is stuck with a needle that draws pink blood from him. (In the sequel, we see two scenes where Stitch scratches Lilo's face. The first is in a dream, the second is real, but the scratches just disappear from her cheek in the movie)

Violence: A lot of animated violence with Stitch destroying various things, creatures trying to catch him, a house blows up, etc. (In the sequel, we see Stitch tearing things apart as he has a "glitch" that makes him temporarily violent and destructive against his will. SPOILER: Stitch actually dies at the end for a brief time, but he comes back to life.) Disclaimer: All reviews are based solely on the opinions of the reviewer. Most reviews are rated on how the reviewer enjoyed the film overall, not exclusively on content. However, if the content really affects the reviewer's opinion and experience of the film, it will definitely affect the reviewer's overall rating.