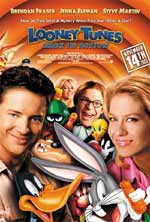 Looney Tunes: Back In Action 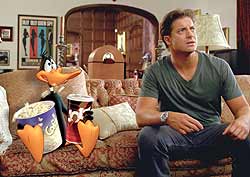 Warner Bros. contract players Bugs Bunny and Daffy Duck are up to their feudin' ways again. Tired of playing second fiddle to Bugs, Daffy has decided to leave the Studio for good. He is aided by Warner Bros.' humor impaired Vice President of Comedy, Kate Houghton (Jenna Elfman), who releases him from his contract and instructs WB security guard/aspiring stuntman DJ Drake (Brendan Fraser) to capture and "escort" Daffy off the studio lot. Suddenly a sidekick without a hero, the duck decides to ally himself with DJ, whether he likes it or not. Consequently, Daffy is on the scene when DJ discovers that his famous movie star father Damian Drake (Timothy Dalton), known for playing suave international spies onscreen, is actually a suave international spy in real life - and has been kidnapped by the nefarious Mr. Chairman (Steve Martin) of the equally nefarious Acme Corporation. It seems that Damian knows the whereabouts of the mysterious and powerful Blue Monkey Diamond, and the Chairman will do anything to get his hands on it. With Daffy in tow, DJ hits the road in a desperate attempt to outrace the evil Acme stooges to the diamond and save the world from their evil clutches. Unbeknownst to the two neo-spies, they are also being followed by VP Kate and Bugs - the studio brass has decided that the rabbit needs a comic foil after all, and Kate's job is on the line if she can't get Daffy back to work ASAP... (taken from the film's official site)

Who doesn't like the Looney Tunes? For me as someone who grew up in the eighties, decades after the cartoons had first been created, the animated shorts starring Bugs Bunny, Daffy Duck, Porky Pig, and crew were aired over and over on Saturday mornings much to my enjoyment. Since the voice of many of the characters, Mel Blanc, has passed on, the Looney Tunes just haven't had much fresh screentime anymore. While the characters will live on in reruns, 2003 brings director Joe Dante's effort to revive the classic franchise with a new film that once again mixes live action actors with our Looney Tunes favorites. In the 90's the Tunes paired up with Michael Jordan for the much criticized Space Jam that round up the Tunes in a politcally correct environment -- something the Looney Tunes were never meant for. Since political correctness has run rampant in society, such beloved characters as Porky Pig and Speedy Gonzalez have been blacklisted for the former's studders and the latter's stereotype of Mexicans. It's sad because as a kid, who even thought of that?!

Dante and company use Looney Tunes: Back In Action as a format to bring the characters back to their roots. While Bugs may still be a little tame here, he's more like the Bugs you've grown to love, and Daffy -- well, he's as obnoxious and hyper as he's ever been. So how do the human actors fit into the mix? Is it as successful 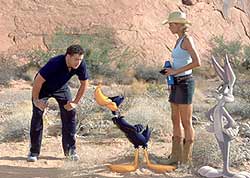 as 1989's delightful Who Framed Roger Rabbit? Unfortunately, no.

What I had working against me for Back In Action, from the moment I sat to watch it, was I had just seen Elf exactly a week prior. I laughed my face off in Elf and I was hoping the Tunes could do it again... Well, they didn't, but that didn't mean there wasn't some downright laugh-out-loud moments. Trust me, there were, thanks to Steve Martin's hamming it up as Mr. Chairman. His over-the-top performance was unique and deviously hilarious. While Elfman and Fraser mostly were set pieces carrying the story along, Martin embodied what could easily have been a cartoon character. But perhaps the fact that it was Martin himself in the ridiculous outfit (kinda looks like Ozzy Osbourne right after waking up) and not a cartoon that helped create the wonderfully silly character.

Another drawback to Back In Action was it focused way too much on the human actors considering this is supposed to be a Looney Tunes film. Why not make Fraser and Elfman glorified extras instead of practically building the film around them? Ah, but alas, Back In Action still remains chock full of so many Looney moments and Looney jokes to keep any fan happy. So many inside jokes from the shorts are present from Bugs mumbling a "I told you we should have turned left at Albuquerque" to Wile E. Coyote shopping for Acme products, but this time on the internet. Some of the jokes are sheer genius while others sadly fall flat on their face (with the Area 52 gag just seeming a little unnecessary and out of place). But with the movie clocking in just under an hour and a half, this film moves along fast.

Fans of the Looney Tunes will be stoked to see their childhood friends on the screen again. A great family film -- although half the jokes will go zipping over the heads of younger ones, and a lot of them are blink-and-you'll-miss-it background moments -- Looney Tunes is entertaining despite not maturing to its full potential as a tribute.

Sex/Nudity: We see Dusty Tails in a short outfit that shows off a lot of leg, etc. We later see some cancan dancers in scant attire and later see an x-ray view of the Mona Lisa painting that shows her cleavage in a bra (as a gag); We see DJ in his boxers after his pants fly off accidentally (another gag)

Alcohol/Drugs: Porky and Speedy are drinking some kind of cocktail while in a resturant; It looks like Bugs is given a martini with a carrot in it while in a spy car.

Violence: Cartoon-related violence, non-lethal. Disclaimer: All reviews are based solely on the opinions of the reviewer. Most reviews are rated on how the reviewer enjoyed the film overall, not exclusively on content. However, if the content really affects the reviewer's opinion and experience of the film, it will definitely affect the reviewer's overall rating.