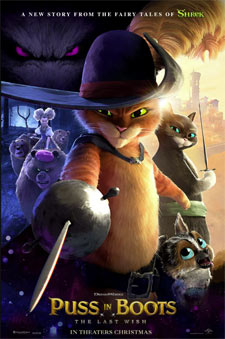 Puss in Boots: The Last Wish

Puss in Boots discovers that his passion for adventure has taken its toll: he has burned through eight of his nine lives. Puss sets out on an epic journey to find the mythical Last Wish and restore his nine lives. (adapted from IMDB)

In 2011, DreamWorks Animation expanded their Shrek fairytale universe by giving their character Puss In Boots his own film. Puss, voiced brilliantly by Antonio Banderas, debuted in 2004's Shrek 2, greatly complementing the Shrek world. The 2011 film, however, was a less than worthy solo vehicle for the character, to the point where it wasn't surprising that a sequel to it never materialized sooner. Now, over a decade later, Puss In Boots: The Last Wish has hit the big screen and, thankfully, it's one of the best DreamWorks films yet.

I have to say, DreamWorks has been running laps around Disney's feature animated films for a while now. And with the masterful Pixar turning in disappointing features lately too, DreamWorks has had plenty of room to flaunt their stuff. Recent releases like How To Train Your Dragon: The Hidden World and The Bad Guys are arguably considerably more enjoyable than what Disney has been doing lately, and a lot of it has to do with the studio largely avoiding social politics, where Disney is otherwise seemingly making it their main goal (at the expense of its quality, too).

This past summer's release, The Bad Guys, employed a unique painterly and almost comic-book styled artistic direction that Puss in Boots: The Last Wish surprisingly continues. And while it may seem like a cop-out to save on the rendering time needed for making the visuals as detailed as possible, it actually works in adding a unique flair to the film. And despite the stylistic direction, the animation is STILL leaps and bounds better than the 2011 movie. I revisited that film before seeing the sequel at the theater, and I was surprised by how dated the animation looked by today's standards. So let it be made clear; Puss In Boots: The Last Wish is a beautiful looking animated movie.

I had rewatched 2011's Puss In Boots in 2019, for the first time since its 2012 disc release. I remembered not being too impressed with the movie originally, but the rewatch didn't fair very well at all. When I watched it again on the eve of seeing The Last Wish, my feelings toward the movie had soured even more. I love Banderas's treatment of Puss, but the story severely lacked. It's tough to place my finger on what exactly rubbed me the wrong way about the movie, but one of my biggest beefs was the character of Humpty Dumpty. He was awfully creepy to look at - even when he's supposed to be endearing - and it was tough to care about his character (at no fault of Zach Galifianakis who voiced him). The backstory of Puss and Humpty being orphanage brothers was also pretty strange. The movie just wasn't as funny or entertaining as it could have been. And, thankfully, Puss In Boots: The Last Wish proves what a solo Puss In Boots movie can be.

After establishing the film's MacGuffin as a one-wish-granting magical wishing star, The Last Wish reintroduces Puss In Boots as the incomparable hero he is supposed to be. He's got his flaws, certainly, but we immediately see his incredible heroics exhibited in the first few minutes. And while he may seem cocky or arrogant, it's all done in a humorous way, with Puss displaying that signature charm of his at the same time. But when a careless moment of self-celebration leads to his own death, he soon discovers that this heroic cat is on his very last life out of his nine lives. He then sets out on a quest to find the wishing star and wish for his nine lives back.

The Last Wish continues the Shrek formula of reinventing famous fairytales and fairytale characters in ways we've never seen before. Goldilocks, who is voiced by Black Widow and Little Women's Florence Pugh, is some kind of outlaw with her allies, The Three Bears. The way the characters interact with each other is pretty funny, and the story does a fantastic job giving heart and soul to these "villains," too. There's also a bounty hunter - an unsettling, red-eyed, dual-sickle-wielding wolf, voiced by Wagner Moura - who menaces Puss throughout the movie. It's one of the most intriguing and memorable animated villains to grace the silver screen in a while. And finally, the film's Big Bad is actually a grown up "Little Jack Horner," voiced by comedian John Mulaney, who has his own sinister reasons for seeking the wishing star. We also see the return of Salma Hayek's Kitty Softpaws as a prickly companion for Puss. The film introduces a brand new character, a painfully optimistic little dog voiced by Harvey Guillén, who tags along for the journey and proves to be an asset to the team.

I honestly didn't expect much going into Puss In Boots: The Last Wish, but what we were given is a fun and surprisingly deep animated feature. The story deals a lot with purpose, living life to the fullest, and what family means to us. It also says a lot of great things about adoption, which is a theme Christians can relate to having been adopted into God's kingdom as His children. It's a highly enjoyabe 100 minutes that is certainly rewatchable and more appealing than, say, the overlong visual bloat of Avatar: The Way of Water, which is also in theaters at the same time. Puss In Boots: The Last Wish is one of those movies that children and parents can fully enjoy.

However, the content for the Puss In Boots: The Last Wish is surprisingly dark. With Puss realizing he's on his last life, the fearless hero suddenly has to face his own mortality, and this becomes a significant source of anxiety for the hero. But this also makes him more relatable, and when he finds his courage again, it's an inspiring message to live without fear - and how fear can rob us of the best our life has to offer. The wolf character is seriously one of the most terrifying characters seen in more recent animated family films, which is a bit of a double-edged sword. He's a formidable villain and he elicits the appropriate amount of fear and intimidation that only a really good villain can. My 12-year-old son loved the character, but he agreed the character was also pretty scary - and that if he was even just a year or two younger seeing this movie, he's not sure he could've handled it. There are also some shockingly violent visuals, too. A gigantic flower monster envelops a side character at one point and as it pulls back, all that's left of the person is their clean skeleton. We see other characters burst into confetti as they die, and some others fall to their deaths from a great height. There are also two instances of blood where a blade grazes a character's forehead, dribbling blood from the wound briefly, and later we see a character with some blood running from their nose for a moment. There are also two uses of the word "cr*p," and one of "h*ll" (from Puss). And at one point, Kitty starts saying "Piece of sh--" when a character puts their finger over her lips and says "Shhhh" which overlaps what would be her use of profanity. There are also at least two instances when the little dog character uses a string of profanities that are bleeped out. Both ways are pretty brazen approaches at implied profanity, and further evidence at how much edgier this movie is than the usual animated movie.

Puss in Boots: The Last Wish is a sweet surprise. It's infinitely better than the 2011 entry, and now one of my favorite releases of 2022. DreamWorks Animation helps end 2022 on a high note, and many families will have a nice option to see at the cinemas -- instead of some decidedly less friendly sci-fi blockbuster.

Sex/Nudity: There are some hints at Puss being a lover or even a womanizer, but nothing is ever shown aside from some women swooning at him.

Vulgarity/Language: 1 incomplete "S" word, 1 "h*ll," 2 "cr*p," 1 possible "Oh my G-d;" We also hear at least two instances where the dog says lots of profanity at once, but it's all bleeped out - played for laughs.

Alcohol/Drugs: We see some people drinking in pubs; We see a drunken Puss fall and die; We see a kind of ghost or projection of the aforementioned drunk Puss.

Blood/Gore: A drop of blood drips down a character's forehead in close-up after a blade grazes them. We then briefly see the bloody cut but then don't see it again after this; A gigantic flower monster envelops a side character at one point and as it pulls back on it, all that's left is the person's clean skeleton; Some characters burst into confetti as they die when hit with a pointed object (we see it sticking out of them before they burst); We see some blood on a character's nose briefly.

Violence: Lots of action violence. The opening scene shows Puss slaying a giant that rips apart a building; A large bell falls on Puss, we then hear in the next scene that he died; We see flashbacks to seven other ways that Puss had died before, including falling from a great height, but it always cuts away before we see his death; Many scary images of forests and lands that the characters have to travel through; A gigantic flower monster envelops a side character at one point and as it pulls back on it, all that's left is the person's clean skeleton; We see large monster flowers chewing on characters as they scream (but it isn't gory); Some characters are shot by sharp objects and burst into puffs of confetti; Several one-on-one sword and blade fights, one of which causes a character to draw blood briefly; Some characters are pushed into a force field of sorts and one character disintegrates in it. Another gets pulled in but others pull them out; A character gets knocked into a magical bag which closes on them. Later, they emerge as a giant and terrorize some characters; and lots of other cartoony action violence. Disclaimer: All reviews are based solely on the opinions of the reviewer. Most reviews are rated on how the reviewer enjoyed the film overall, not exclusively on content. However, if the content really affects the reviewer's opinion and experience of the film, it will definitely affect the reviewer's overall rating.