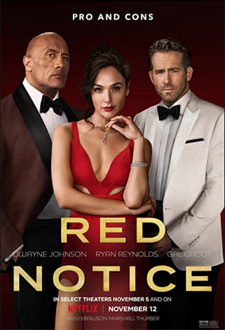 An Interpol agent tracks the world's most wanted art thief. (from IMDb)

With streaming services increasing the amount of films getting exclusive distribution and release, the caliber of film in these instances is beginning to increase as well. This has been something that has been slowly on the rise, but the recent global pandemic has had the film industry scrambling to restructure. With that, Netflix has secured the rights to a blockbuster-grade action film titled Red Notice which unites the big box office names of Dwayne Johnson, Ryan Reynolds, and Gal Gadot. The movie did make its debut in a very select number of theaters a week earlier, but as of November 12th, it's available on anyone's personal movie-viewing device with a subscription to the popular streaming service.

Red Notice is an action "buddy" comedy cut from a similar cloth as films like Rush Hour, Shanghai Noon, Lethal Weapon, or any number of two unlikely guys being stuck together while trying to get a specific job done. In this case, it's a race against time to steal a series of three priceless artifacts -- gold Egyptian eggs that date back to the days of Cleopatra. Dwayne Johnson plays a criminal profiler for the FBI named John Hartley who is helping Interpol track down a renowned art thief, Nolan Booth, played by Ryan Reynolds. But when Hartley is framed for stealing, he gets stuck with Booth, and the two end up on quite the journey as they try to one-up another art thief nicknamed The Bishop - played by the lovely Gal Gadot - who seems to best them at every turn.

Red Notice is the kind of action comedy that doesn't take itself very seriously, and gets by nicely on its charm and knack for touting a fun vibe. Even the action scenes are relatively tongue-in-cheek, which is best exhibited when the three leads fight each other in a villain's ancient weapons-filled treasure vault. Reynolds' fast-talking, joke-quipping Nolan is a lot like pretty much all of his characters on screen these days, but he fuels the film's funnybone, keeping things light even when Johnson's Hartley is getting tortured briefly in one sequence. The caper itself is fun too, and the movie goes on a globe-trotting adventure that would make 007 jealous. It's one of those fun, entertaining summer movies that begs the viewer not to overthink the proceedings and just sit back and enjoy the ride. I found myself swept up and enjoying the trip, but I did find myself thinking "Wait... really?" a few times while pondering it afterwards. It's probably not the most original affair, and in the end, it does feel like there was something lacking from making it great, but it was undoubtedly a fun film nevertheless.

The content of Red Notice is a pretty hard PG-13, mostly due to profanity and some off-color jokes from Reynolds. Reynolds says a just-barely-incomplete use of the "F" word at one point, and later emphatically says it in full (as "What the f---!!"). There's also one more muffled "F" word from a random character whose mouth is taped shut and he mumbles the profanity. Aside from that, there are over 20 uses of the "S" word, an assortment of colorful phrases and words (including "S.O.B," "*ssh*le," "d*ck" and more), and plenty of blasphemy. Also, at one point, Nolan tries to appeal to John that he lies to everyone - not just him - and lists a bunch of people, including "Baby Jesus," and then sort of guiltily looks Heavenward. Otherwise, there are a couple crude jokes and a very random but brief prison shower scene where the guys are showering in a room with other men and we see a man's bare butt in the background. (Otherwise there are no sex scenes or anything.) There is no female nudity, but there is plenty of cleavage in Gal Gadot's outfits, including a pretty small swimsuit she is seen wearing at one point. Thematically, the movie makes a statement about the main characters having parental issues growing up - especially with their fathers - which could upset some viewers (particularly for those who might find this to be a sensitive subject). Lastly, there is a hearty dose of action violence, but it's seldom bloody or graphic -- most of it is bloodless. There's a brief scene of torture by shocking with shock paddles, but it isn't very long or focused on.

Overall, Red Notice should scratch the itch for anyone looking for a decent action/adventure comedy with a few fun movie stars to take the trip with. It's hardly fantastic, but it's thoroughly enjoyable and pretty entertaining escapism. Unfortunately, the frequent profanity and some crude remarks drag the film down and make it one I can't outright recommend, so you may want to look over the content carefully before checking it out.

Sex/Nudity: We see some fully naked renaissance statues in a museum; Nolan describes Sotto's mansion as a I probably have a tiny penis villa; We see John and Nolan showering in a prison shower with other men in there too. In the background, we see an inmate's bare butt. Other men are shown with their bare torso's down to just below their stomachs (with a little bit of their hips); John asks Nolan if he can fly a helicopter, and he responds, "Does the back of your head look like a huge penis?"; Bishop threatens a man and mentions she knows his browser history, which he responds to by widening his eyes; Nolan tells John that, with using "deep fake" technology, "I could send a video to your mom of you mouth sexing a goat"; The Bishop shows cleavage in her dress; Inspector Urvashi Das shows a lot of cleavage in a dress she's wearing; After a fight with the Bishop, he's handcuffed to John and they collide and fall to the floor. He then remarks, "this is such a confusing erection"; The Bishop is seen getting out of the water onto a boat in a pretty sexy and revealing bathing suit.

Alcohol/Drugs: Nolan pours himself a drink from a bottle of alcohol and sips it. We see John has a glass of it, too, and drinks it; We see Sotto drinking at a party (others probably have drinks too); Bishop holds up champagne that she brings to an interrogation. She later drinks it with another person.

Violence: Hartley gets pinned between two doors briefly while pursuing Nolan; Nolan drops a smoke bomb that goes off in the museum; A guard falls from scaffolding when Nolan pulls a pin out. He ties another to a pole and causes a couple to fall by pulling out more pins. He then causes all of it to fall on some more guards who are pursuing him; Nolan knocks the gun out of John's hand and John tackles him through a window onto a roof below as they scramble to grab ahold of something; A van crashes into a car; Armed Interpol agents enter a room with guns aimed at a character; In a flashback, we see a man tied up with swollen eye and bloody nose. Sotto Voce then grabs him by the throat and he chokes him to death as the camera pans away and focuses on their shadows on the wall; A prison fight breaks out in the laundry room with lots of hand-to-hand fighting. A man is kicked in the crotch, John clamps a man's head in a steamer press, John head butts a guard; Nolan slips on a rock wall and John steadies him; Nolan hits a guy in the face with a snowball and pulls him down to the floor of a helicopter to knock him out; Prison guards shoot at them with machine guns. John fires back. He then takes a pistol from a downed guard and shoots a gate so it collapses; A guard fires a rocket launcher, blowing up a rope bridge, with the explosion tossing John in the air; Nolan fires a helicopter gatling gun at armed guards, hitting some; A guard shoots a rocket launcher at the helicopter, and John opens the door so the rocket zips through the open doors; Bishop has a man tied to a chair that she is seen talking to; Bishop trips a guard as he walks in a room, who hits their head on a table and is knocked out; Bishop lightly slaps a guy in the face; Nolan and John bump into each other and crash a tray of wine; Sotto shoots a chandelier that causes it to light on fire (as a spectacle for his guests; John knocks a gun from the Inspector's hands; Nolan, John and Bishop fight brutally with hand-to-hand attacks and using weapon artifacts encased in glass in a vault; A woman tortures a man with electrical paddles. She then starts singing "Downtown" as she talks about going to his crotch to shock him; Sotto chokes John briefly; A man falls over after being poisoned. He then sits up, startling others; A guard comes into a room and Bishop kicks him in the face; Sotto shoots at John and Nolan, and then John punches him in the face; A man shoots at them with a machine gun; While in the middle of a bullfighting ring, a bull charges and hits John, knocking him over. They then run away and the bull rams into a wall; A man holds another man outside a moving train by his collar as he interrogates him; We see some real archival war footage while someone is telling a story about Nazi's; While in a room full of antiquities, a gun fight breaks out; A car chase ensues through a mine shaft; As the cars speed through the mine tunnel, Bishop hits multiple soldiers, while John punches some, and Nolan gets hit and choked. One soldier hanging off the side of the car collides with a part of the rock wall sticking out and falls to the ground; A car flies from a cliff and lands in a pool of water; A woman is taken away by security and a singer with a guitar pushes them. They then grab him and drag him away so he swings his guitar at them. Disclaimer: All reviews are based solely on the opinions of the reviewer. Most reviews are rated on how the reviewer enjoyed the film overall, not exclusively on content. However, if the content really affects the reviewer's opinion and experience of the film, it will definitely affect the reviewer's overall rating.