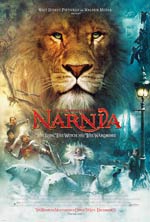 The Chronicles Of Narnia: The Lion, The Witch And The Wardrobe 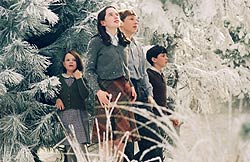 Walt Disney Pictures and Walden Media present The Chronicles Of Narnia: The Lion The Witch And The Wardrobe, in which four young adventurers playing hide-and-seek in the country home of an old professor stumble upon an enchanted wardrobe that will take them places they never dreamed. Stepping through the wardrobe door, they are whisked out of World War II London into the spectacular parallel universe known as Narnia -- a fairy-tale realm of magical proportions where woodland animals talk and mythological creatures roam the hills. But Narnia has fallen under the icy spell of a mad sorceress, cursed to suffer through a winter that never ends by the White Witch Jadis. Now, aided by Narnias rightful leader, the wise and mystical lion Aslan, the four Pevensie children will discover their own strength and lead Narnia into a spectacular battle to be free of the Witchs glacial enslavement forever. Touching on eternal themes of good and evil, and of the power of family, courage and hope in the darkest moments, The Lion The Witch And The Wardrobe is a classic fable for our times. (from MovieWeb.com)

Since the popularity of the films based on J. R. R. Tolkien's popular Lord Of The Rings fantasy stories, it seemed only logical that filmmakers would look to Tolkien's friend C.S. Lewis for his Chronicles Of Narnia. And with the box office-busting success of last year's The Passion Of The Christ, Disney would be insane not to get behind such a potentially lucrative franchise as the Narnia stories.

Although comprised of seven books, the first film to be released in the series is actually based on the second book in the series, although Lewis had written The Lion, The Witch And The Wardrobe first of all of them. The Lord Of The Rings films raised the bar on fantasy filmmaking in general and expectations were indeed high for those going in to see ...The Wardrobe. The end result? A fine family film that successfully weaves an eternal message into an exciting tale.

The casting of The Lion, The Witch And The Wardrobe was well-done. A few times, the children seemed to have trouble staying within their character (mainly Lucy), but overall were able to carry the film quite well. I must admit I wasn't sure about how they could make the film work upon seeing the kids on screen in the trailers, but I was quite pleased with the outcome. With so many actors and actresses in this film being lesser-known (or entirely unheard of), it helped strengthen the believability of their characters. I wasn't watching the screen thinking "Oh that's [insert well-known actor's name] as Peter!" Instead, William Moseley is Peter. Aslan was brilliantly voiced by Liam Neeson. Although barely credited for the significant role, his deep, warm voice seemed the perfect choice for the famous lion. Tilda Swinton was quite wonderful as the witch as well. She was creepy yet seductive enough in her role. While Monica Belluci seemed to portray those traits more strongly in The Brothers Grimm, Swinton's portrayal was more appropriate for this sort of film. Finally, Professor Kirke, played by Jim Broadbent, was such a delightful and mysterious character, that I found it was a shame there wasn't more time spent on him.

Although The Lion, The Witch And The Wardrobe is a beautiful story and the film is exciting and moving, the film is not without its flaws. The biggest problem I had with ...The Wardrobe were the special effects. While a lot of fantasy films that I grew up on (like The Neverending Story) relied exclusively on puppets for making otherworldly creatures come to life, many films today rely almost entirely on CGI to accomplish this. While puppets help make creatures tangible and realized, CGI almost always gives characters an artificial quality that robs the reality. The Lion, The Witch And The Wardrobe had sort of a mixed bag of this. In fact, it was most glaringly noticeable in a sequence where wolves are chasing our heroes and the lead wolf is CGI and some of those following were real. It seemed odd and even slightly jarred me from the story. Other characters benefited from the CGI, like Mr. and Mrs. Beaver and sometimes even Aslan, where computer graphical capabilities could lend more humanity to the characters.

While I understand that Lewis was deliberate in fusing the story with Christian symbolism, I was still kind of surprised to find so much of it in The Lion The Witch And The Wardrobe. It felt odd to find so much parallelism between Aslan and Jesus in a film bearing the Disney brand. But there ended up being moments in the film where I hadn't felt such a clear and cut message of Jesus' sacrifice and forgiveness since watching The Passion Of The Christ. ...The Wardrobe truly offers some beautiful and touching moments.

Lastly, it's important to address the violence of some of the film's content. While most deaths and violence occur off-screen, it's not focused upon. It was strange to see a Lord Of The Rings / Mummy Returns sort of mythical battle tamed further from a PG-13 audience to a PG audience, but director Andrew Adamson handled it quite well in keeping it exciting and moderately intense without being too graphic or brutally violent. Parents might want to note the darkness of the Witch and the violence of the climactic battle scene before making the final decision whether or not to take their kids to see this film.

Overall, I really enjoyed The Lion, The Witch And The Wardrobe. It's a wonderful and exciting fantasy film that holds quite a bit of spiritual weight to it. There's plenty to talk about afterwards if you're looking for a good conversation piece. Those just looking for a fun film will enjoy the mystical and imaginative world of Narnia. It's no Lord Of The Rings in any way, shape, or form, but it may be unfair to even compare the two too much. Regardless, it's a fine film and I greatly look forward to future installments in the series.

Blood/Gore: We see some scrapes and slightly bloody cuts on Edmund's face and knees. We see a slightly bloody wound on a character after they've been stabbed. Some characters have small cuts on their faces during and after a battle.

Violence: A dwarf tackles and threatens to kill Edmund with a knife but does not; The White Witch hits a fawn in the head with her staff; The White Witch slaps Edmund in the face; Some wolves attack several characters; The White Witch turns many characters into stone, presumably killing them; There is a climactic battle between good and evil where many characters are either killed or turned to stone (and sometimes crumble); One main character is stabbed; etc... Disclaimer: All reviews are based solely on the opinions of the reviewer. Most reviews are rated on how the reviewer enjoyed the film overall, not exclusively on content. However, if the content really affects the reviewer's opinion and experience of the film, it will definitely affect the reviewer's overall rating.